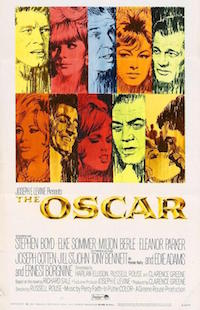 This is the story of the dreamers and the schemers, the hustlers and the hopefuls, the free-loaders and the phonies, the fakers and the famous, all fighting for the highest possible award!

There’s nothing Hollywood likes more than to expose the seedy underbelly of the entertainment industry. The dark sides of the music business, the fashion and literary worlds have all been examined under the cinematic microscope. But nothing can quite compare to when Hollywood turns the camera upon itself. The results are almost always guaranteed to be bad movie bliss. Trash classics like The Lonely Lady (1983), The Carpetbaggers (1964), The Star (1952), and The Legend of Lylah Clare (1968) have all made their mark in this dubious dramatic subgenre, but none can quite compare to the deliciously bad, all-star fiasco that is The Oscar (1966).

What it’s all about: While sitting in the audience on Hollywood’s biggest night, Hymie Kelly (an unlikely Tony Bennett) remembers the good ole days spent with pal Frankie Fane (Stephen Boyd). “It was all for one and one for all… you, me and Laurel.” Laurel (Jill St. John) was the proverbial stripper with a heart of gold, Frankie was her fast talking “spieler”, and Hymie was their sad sack tag-a-long. Talk about a third wheel.

Frankie roughs up a club owner who tries to cheat the trio out of their cut of an evenings profit. Before they can make it to the county line, they’re hauled in by the corpulently corrupt local sheriff, Broderick Crawford. “Now, if you’re lookin’ for a bruise,” he warns Frankie while slurping down a carton of ice cream, “Keep scratchin’.” Booked on trumped up prostitution charges, they must sell Laurel’s car to post bail.

They make it to New York by “bus and thumb” where Laurel auditions for gravelly Ed Begley. She lands the dancing gig. While she’s busy working, Frankie and Hymie go to a “swingin’ party in the Village”. It’s there that Frankie meets the impossibly chic Kay Bergdahl (Elke Sommer).

“Are you a tourist or a native?” he asks.

“Take one from column A and two from column B,” Sommers purrs in her German accent, “you get an eggroll either way.”

Their conversation grows increasingly existential and ridiculous as she continues, “I’m not the kind of woman who uses sex as a release, or even as a weapon.”

“You free thinkers confuse me.”

“I am the end result of everything I’ve ever learned, all I ever hope to be and all the experiences I’ve ever had.”

“You make my head hurt with all the poetry.”

All this before they’ve even introduced themselves.

With a job schlepping bolts of fabric in the garment district, Frankie continues to pursue designer Kay with even more priceless bad movie dialogue, “I’ll show you the big town. We’ll have Manhattan, the Bronx and Staten Island too.”

One evening, Kay delivers some costumes to the theatre and Frankie stays to watch the rehearsal. When a choreographed fight doesn’t meet his standards, Frankie hops on stage and shows them how it’s done.

Chi-chi producer Sophie Cantaro (Eleanor Parker) likes his “youthful exuberance” and is inexplicably impressed when he purposefully chews the scenery during a meeting in a theater row restaurant. She “trains” him and puts him in a show. It’s not long before they’re on their way to Hollywood where Sophie and “Kappy” the agent (Milton Berle) talk the head of Galaxy Pictures (Joseph Cotton) into signing Frankie.

“It was a new world and he needed a friend alongside,” Hymie narrates, “I came, I saw and he conquered.”

As his new PR man, Hymie moves into Frankie’s pad and offhandedly mentions that Laurel is dead.

In a date set up by the studio, Frankie takes out a snooty starlet (Jean Hale). “You can put your suave masculine charm in escrow for the night,” she warns, but on the red carpet he shows her who’s really the boss.

The years pass and Frankie becomes the hottest actor in the business. “The parts got bigger and Frankie was hooked. Like a junkie shooting purest quicksilver into his veins, Frankie got turned on to the wildest narcotic known to mortal man… success.” While at a chi chi nightclub, Frankie chats up gossip queen Hedda Hopper before abandoning his date for Kay, who now works at the same studio as Frankie.

She tries to resist him, but Frankie plays it suave and takes her to his boat, which is aptly named Miss Kay B. While on board, he insists he has more to offer her now, but she’s not buying what he’s selling. “So what, you haven’t changed. It’s that seed of rot inside of you which makes you what you are. You represent everything I loathe.”

“You mean everything you love.”

After striking out with Kay, Frankie heads into the arms of Sophie, who’s just as good as Kay at making melodramatic declarations wrapped up in a pretty bow of purple prose. “You’re some sort of fog that comes drifting in here at night and out again in the morning. You go after what you want and in some men it’s admirable, in you it’s unclean.”

Frankie runs into an old actor friend (Peter Lawford) at a local restaurant and receives an uncomfortable glimpse of what his future may hold when he learns that his pal is all washed up and working as the matre ‘d.

Kay agrees to a trip to Tijuana when Frankie gets her a job working with Edith Head. Not only does the legendary designer make a rare onscreen appearance in The Oscar, but she would later be nominated for a real life statuette for designing the costumes in the film.

Fame follows Frankie wherever he goes, even south of the border. At a bullfight, obnoxious American couple Barney and Trish (Ernest Borgnine and Edie Adams) talk Frankie and Kay into witnessing their quickie Mexican divorce. This inexplicably gets Frankie in the mood. After planting some truly unappetizing kisses on Kay, they get hitched. Marriage doesn’t curb Frankie’s tomcatting ways and Kay soon becomes unsatisfied and bitter. Despite the fact that she lounges around in barely-there negligees, Frankie spurns his wife’s advances, leaving poor Kay to bemoan her fate, “In no time at all I’ve been typecast as the nagging, shrewish hausfrau.”

Things aren’t so great at the studio either. Frankie’s films start to loose money and the studio doesn’t pick up the option on his contract. “Frankie couldn’t face reality because he’d lost touch with it,” Hymie informs us, “The word was out, he was box office poison.”

Kappy tells him that a TV pilot is his only prospect. “Frankie, winter is coming. Be smart, get out of the cold.” While in the middle of negations for the TV series, Frankie learns that he has been nominated for an Academy Award.

Anxiety haunts Frankie, resulting in the kind of deliciously silly nightmares that can only happen in movies such as this. He’s seen the bottom and nearly lost everything. He’s going to do everything possible to stay on top. He gets Barney the private dick to leak information about his, Hymie’s and Laurel’s checkered pasts, sure that the scandal will garner sympathy from the Oscar voters. “I blew the whistle on myself,” he tells Hymie, “You’re only remembered when you win… and I’m gonna win.”

In the novel on which the film is based, Frankie goes about discrediting each of the other nominees in his bid for Oscar gold. In a stab at vermislitude, the producers of The Oscar decided to use real life celebrities as Frankie’s competition, instead of the fictional characters that appear in the book. Frankie’s self-inflicted scandal simplified the plot and freed up valuable screen time. It also meant that libelous (but completely fictional) claims wouldn’t have to be made against the celebrities who’d lent their names to the project.

A swanky Hollywood party is held in Frankie’s honor and his plan seems to be working, that is until Barney begins to squeeze him for more money. When he asks Kappy for the fifteen grand to pay the blackmail, Kappy gives his biggest client the heave-ho, “Like the snake that sheds it’s skin, Frankie Fane I’m getting rid of you.”

Unable to get the cash and googly-eyed with panic at the thought of losing everything, Frankie turns to his old pal suggesting that they silence Barney for good. Hymie finally draws the line.

Frankie tracks down Trish, who is more than willing to trade information about her ex-husband if it means a way of getting into the picture business, “I scratch your back, you scratch mine.” With the threat of the IRS investigating some hidden assets, Barney backs off.

Hymie returns to the fold one last time. “I never had the guts to tear myself away from you!” Scenery is chewed and fists begin to fly when he finally reveals that Laurel died during the miscarriage of Frankie’s baby.

After a few well-deserved punches, Frankie ends up flat on his back. Even Kay can’t stand the sight of him. “Look at what’s left of you. There isn’t even enough to feel sorry for. Goodbye Frankie and I do hope the Oscar keeps you warm on cold nights.”

We return to where the film began, the big night, where Merle Oberon is about to announce the nominees for best actor. Frankie, along with those he has wronged, wait anxiously as the envelope is opened.

“And the winner is… Frank…”

Frank Sinatra proudly strides to the podium to accept his statuette.

Frankie claps a little too eagerly and grins a little too widely before collapsing back into his seat. His career has disappeared in an instant. Justice has been served… Hollywood style.

In conclusion: By anyone’s standards, The Oscar would be a contender for Cool Cinema Trash status simply by nature of its subject matter. What truly earns it a place in the bad movie pantheon is thanks one man: Stephen Boyd. His performance as unlikable anti-hero Frankie Fane goes beyond mere scenery chewing. With his tough guy accent and wild gesticulations, his performance is like a sledgehammer, there’s absolutely nothing subtle or sympathetic about Frankie Fane. He’s an irredeemable, narcissistic jerk, which only serves to make everyone else in the film look ridiculous since they’re bound by the screenplay to find him charismatic and beguiling.

Inexplicably, The Oscar is not yet available on DVD. Used VHS copies and homemade DVDs (struck from the laserdisc release) can usually be found online. Any efforts to see this bad movie gem will not go unrewarded. If you’re lucky enough to have a copy already, hold onto it, it’s as precious as the little gold statuette itself.