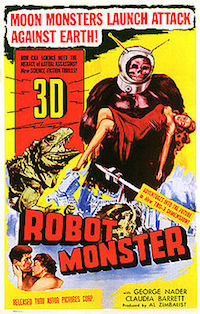 Robot Monster (1953) is one of the few movies that can compete with Ed Wood’s Plan Nine from Outer Space (1959) for the title of worst film ever made. Clips from Robot Monster have become synonymous with the depths that no-budget 1950’s sci-fi movies can reach. Even if you’ve never seen it in its entirety, you’ll no doubt recognize George Barrows lumbering around in a gorilla suit and space helmet. What sets it apart from the rest of the drive-in dreck is that there’s a naive determination on the part of it’s participants to forge ahead despite rock bottom production values. In spite of everything it has going against it, there’s an endearing “Let’s put on a show!” quality that’s so wonderfully inept that its reaches a level of badness that rivals any Ed Wood film.

What it’s all about: Little Johnny (Gregory Moffett) and his sister Carla (Pamela Paulson) are playing outside when they happen upon an archeological dig. The Professor (John Mylong) and his assistant Roy (George Nader) are working outside the mouth of a cave in Bronson Canyon. “Gee, are you scientists?” Johnny asks. His questions will have to wait until after a picnic lunch with the family. After eating, Johnny’s mother and his sisters Carla and Alice (Claudia Barrett) take a nap among the rocks and dirt.

While the family is asleep, Johnny sneaks back to the cave, but Roy and the Professor are gone. Suddenly there’s an electric flash and Johnny falls to the ground. Stock footage dinosaurs are suddenly and inexplicably doing battle. When Johnny recovers, he finds “hi tech” machinery at the mouth of the cave. There’s another electric flash and Johnny runs for cover as the mighty Ro-Man appears. The infamous Ro-man costume is so blissfully silly that Ro-Man should be named the official mascot…no, patron saint of bad movies. Equally ridiculous is the “Billion Bubble Machine” that sits and percolates for no other reason than it must have looked cool in 3-D. (Robot Monster was originally released in both 2-D and 3-D formats)

Using his futuristic communication console (a bedroom dresser with a “view screen” where the mirror should be) Ro-Man contacts his home planet. Using his kooky style of techno-jargon, he reports on his progress. He has destroyed mankind with his Calcinator Death Ray (the electrical flashing light). “Their resistance pattern showed some intelligence,” he tells the Great Leader, “But all are gone now. The way is clear for our people.”

“Then there are perhaps eight people left on earth?”

“Precisely. Find and destroy them.”

Johnny runs back home…or what’s left of it. In the crumbling ruins of suburbia, humanity’s only hope has set up house. The Professor (who is now Johnny’s daddy) explains in his faintly European accent that, “The only reason we are still alive is that your sister Alice and I worked out a way to reflect his deadly beam away from the house.”

A crude system of wires surrounding the house prevents them from being discovered. When Ro-Man appears on their home view screen, he taunts them with an instant replay of the earth’s destruction. “Your death will be indescribable. Fool hu-mans, there is no escape!”

Roy hypothesizes that the Professor’s experimental antibiotic serum, which they have all taken, is what makes them immune to the death ray. They must get word to the space platform where what is left of humanity is stationed. Alice comes up with a way, “We’ll have to rewire the circuits on the view screen so that we can broadcast without Ro-Man picking it up. If only I had a decent assistant who could take orders instead of trying to be the boss.”

Though the script by Wyott Ordung is packed with quotable Ed Woodsian dialog, Roy’s response to Alice’s jibe is shocking hilarious. “You’re so bossy that you ought to be milked before you come home at night!”

Since she’s the last dateable woman on earth, Roy quickly has a change of heart. As they work on the transistors, he makes his move, “You know something, you’re either too beautiful to be smart, or too smart to be beautiful.”

“I guess we do get along alright at that,” she admits. “Let’s work together now…we can play later.” Despite their hard work and flirty repartee, they fail to succeed.

Ro-Man calls them up and taunts them again, this time with footage of the destroyed “space platform”. The sequence is a wacky combination of stock footage and a rinky-dink spaceship model. As the ship flies erratically towards the camera, the prop man’s hand can clearly be seen.

Ro-man orders them to give up. “Calculate your chances. Negative, negative, negative.” He then asks what might be the most hilarious rhetorical question in film history, “Is there a choice between a painless surrender death and the horror of resistance death?”

The Professor refuses to surrender in the face of such nonsensical threats. Instead, he tries to appeal to Ro-Man’s humanity by introducing each member of the family, “Let me show you the six people you want to destroy.”

Intrigued by Alice, Ro-Man agrees to negotiate only with her. “Is Alice gonna have a date with Ro-Man?” young Carla asks. Alice is determined to face the alien, but her concerned family ties her up to keep her from going.

Johnny sneaks away to meet with Ro-Man. When the death ray fails to work on him, Johnny tells Ro-Man that he “Looks like a pooped out pinwheel.” Being the precocious blabbermouth that he is, Johnny reveals the secret of their survival.

Ro-Man angrily shakes his fist as Johnny scurries away. “I will recalculate the spectrum dust in the Calcinator Death Ray to counter act this antibiotic and you will all be destroyed!”

While searching for little Johnny, Roy and Alice hide from Ro-Man in some dry brush. Danger apparently gets Roy frisky, but Alice acts coy. This entire sequence is played without sound, leaving poor Nader and Barrett to mime like two very bad silent movie stars. “Have you been playing house?” Carla asks when a very satisfied looking Roy and Alice return home. In a makeshift ceremony, the professor marries the two lovebirds.

When Carla ventures outside the safety of home, Ro-Man captures and strangles her. He then stumbles onto the honeymooners who are making out in the dirt. An awkward fight ensues and Roy is thrown over a cliff. Actually, he only ducks behind a hill with a prolonged scream indicating a fall to his death. Alice is swept away by the hairy simian conqueror, but they stop long enough to discuss Ro-Man’s weakness.

While his parents bury Carla, Johnny comes up with a plan to lure Ro-Man away and rescue Alice.

With a seemingly indifferent Barrett clutched in his arms, Barrows stumbles back to the cave where Ro-Man makes his move. “Suppose I were hu-man, would you treat me like a man?” he asks as he tears at the straps of her dress. When his groove is interrupted by the telecomunicator, Ro-Man must somehow subdue Alice.

In a moment so sublimely silly that it has to be seen to be believed, Alice stands idly by as Ro-man tries to tie her up while repeatedly adjusting his crooked helmet. When it becomes apparent that tying her up is too complicated and time consuming, Ro-man simply knocks her unconscious. After a brief conversation with the professor on the view screen, “Call me again at another time,” Ro-Man turns back to Alice who is now wide awake and has been miraculously bound in rope!

Quality time with his favorite earth gal is interrupted yet again when the Great One calls to berate him, “You violate the law of plan. Fact. You have captured the girl and not destroyed her. Fact.”

“To laugh, feel, want. Why are these things not in the plan?” Ro-Man questions.

The Great Leader hasn’t time for mushy emotions and gives Ro-Man his orders, “One, destroy the girl. Two, destroy the family. Fail and I will destroy you.”

But how can he kill the woman he loves? In a crisis of conscience, Ro-man expresses his newfound feelings in a bad movie sonnet that is Shakespearian in scope. “I cannot, yet I must. How do you calculate that? At what point on the graph do must and cannot meet? Yet I must, but I cannot.” When Johnny arrives at the mouth of the cave Ro-Man begs, “Alice, do not hate me. I must.”

Just as Ro-Man strangles Johnny to death, the wrath of the Great One is unleashed. “You wish to be hu-man? Good. You can die a hu-man!” Shocked by his own flashing death ray, poor Ro-Man collapses as more dinosaur stock footage is shown.

The earth’s final destruction dissolves away to show a helpful Roy carrying Johnny, who apparently got a serious bump on the noggin. “Boy, was that a dream or was it?” he asks as they leave the cave and head for home.

A last electrical flash reveals the ghostly apparition of Ro-Man, who lumbers menacingly towards the camera not once…but three times!

In conclusion: Director Phil Tucker had originally planned for there to be a robot villain in Robot Monster. When use of the robot costume they wanted fell through, Tucker contacted actor and stunt man George Barrows. He owned his own ape costume and made his living by appearing in low-budget jungle adventures. The rest, as they say, is history. In another tale that has since passed into bad movie legend, Tucker was so distraught over the failure of Robot Monster and the direction that his career had taken, that he got a gun and attempted suicide. The punch line of the story is that he missed. How much of this tale is true (it’s undoubtedly been embellished over the years) is anybody’s guess. Tucker directed a handful of other films, including The Cape Canaveral Monsters (1960).

After being put under contract at Universal, George Nader’s Hollywood career consisted mainly of beefcake roles like the Cool Cinema Trash favorites Carnival Story (1954) and The Female Animal (1958). In the sixties he left Hollywood behind and continued his career in Europe. Nader retired from acting after an eye injury and in the late seventies wrote the gay sci-fi novel Chrome.

Robot Monster has been released on VHS and DVD by various companies over the years. The DVD put out by Image Entertainment (as part of the Wade Williams collection) looks great. A few minor specks on the print are understandable considering the films age. The disc includes a trailer and previews of other Image titles including several Ed Wood films.

Robot Monster was once the butt of caustic jokes on MST3K, and it’s easy to see why it was chosen. Every oddball moment of Robot Monster is a veritable treasure trove of comedic fodder. Whether you’re a hu-man or a ro-man, it’s hard not to love this bad movie gem. 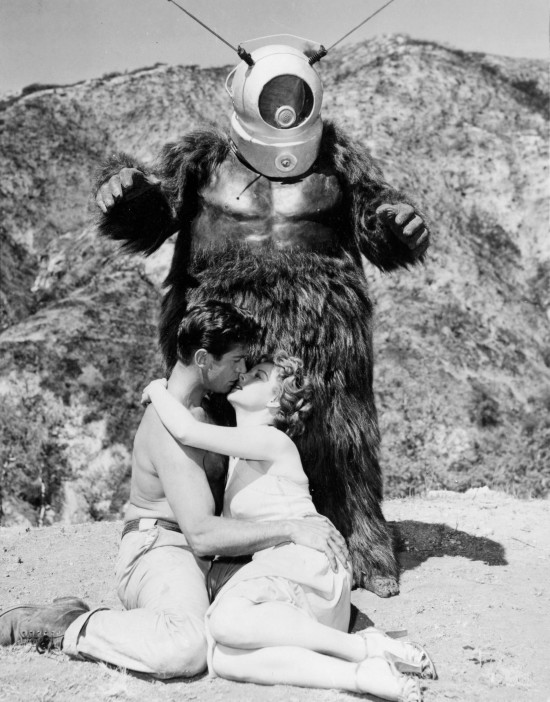