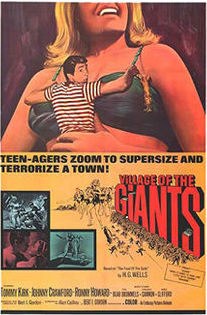 In what may be the grooviest opening credits sequence ever, the teenage inhabitants of Village of the Giants (1965) jiggle and gyrate (in exploitative slow motion no less) to Jack Nitzsche’s catchy theme music. According to one of the first on screen credits, the movie is based (it should read “very loosely based”) on the story Food of the Gods by H.G. Wells. Village of the Giants is actually a wacky genre hybrid dreamed up by producer/director Bert I. Gordon who blends his unique love for all things big and small with teenage beach party antics. Some of Gordon’s other films have included Beginning of the End (1957) The Amazing Colossal Man (1957) and Attack of the Puppet People (1958).

In nearby Hainesville USA, wholesome teens Mike (Tommy Kirk) and Nancy (Charla Doherty) are engaged in some old fashioned necking when they are interrupted by an explosion in the basement. They run to check on Mike’s kid brother Genius (Ron Howard) who’s recent scientific experiment hasn’t gone quite as planned. The result of the mishap is a mass of bubbling goo. When a neighborhood cat slips in through the basement window and eats the mysterious substance, it grows to gigantic proportions.

After the family dog chases the cat away, the kids decide to test the effectiveness of their new discovery by feeding it to a pair of ducks who also grow to enormous proportions.

“Can you imagine the problems we’re gonna solve?” Mike asks, “Unlimited food supply at practically no additional cost.” While Genius tries to replicate the formula, the family dog eats some of the goo as well. Boy, they’re going to need an industrial sized pooper-scooper.

Every small town needs a swinging nightspot. At the Whiskey A Go-Go the Beau Brummels perform while Toni Basil shakes her fringe in a cage high above the dance floor. Basil served as the films choreographer and would gain notoriety in the 1980’s with her cheerleading anthem, “Mickey.”

The bad teens arrive just in time to see the ducks literally shaking a tail feather out on the dance floor. Even though the freakishly large fowl take up most of the club space, everyone keeps on dancing. “Hey, those are my ducks!” Mike proudly proclaims. The bad kids, lead by Beau Bridges, plot to steal Mike’s “million dollar secret”.

Bridges tries to impress Nancy by opening a pop bottle with his bare hands while Tisha Sterling attempts to seduce the secret out of Mike. It’s a no go, but Mike manages to get a few kisses out of the pretty blonde.

At a BBQ the next day, the ducks become the spit roasted main course. Mike serves up mutant poultry to the hungry townsfolk, all of whom appear to be under the age of twenty-five. Girls wander around the town square in their bikinis while pop stars Freddie Cannon and Mike Cliff intermittently perform for no discernable reason. Cannon badly lip synchs his hit song “Little Bitty Corrine” and Cliff croons his “Marianne” to an appreciative crowd.

When Mike and Nancy make a quick stop by Genius’ lab to make sure that the goo is safe and sound, a giant tarantula accosts them. Mike shows some ingenuity by flooding the basement and using a live wire to electrocute the beast. After they leave, one of the mischievous teens from out of town (Tim Rooney) breaks into the basement to steal the goo. While searching the lab (which is remarkably dry and free of spider corpses) he sets off a burglar alarm. The good teens arrive in time to watch Mike and Fred engage in some suburban fisticuffs. During their “rumble”, Kirk is stripped down to a disturbingly tiny pair of short shorts. It all ends in a dog pile free-for-all.

At the abandoned theatre that serves as their base camp, the bad kids try to figure out what to do with the goo. Someone suggests that they eat it. “You always said you wanted to be a big man,” one of them taunts, “Well now’s your chance.” To prove that he’s not “all talk and no action”, Fred caves in to peer pressure and divides the Playdough-like substance between them.

In the movie’s pivotal (and relatively well done) special effects sequence, each of them eat their share, burst out of their clothes, and grow to enormous size. They may be juvenile delinquents, but modesty still dictates that they fashion new clothes out of spare fabric and theatrical curtains.

“Now maybe it won’t be so easy for them to kick us around anymore,” Tim Rooney laughs in a moment that plays into the era’s societal fear of untamed youth, “This isn’t their world anymore, it’s gonna be ours.”

As with all the other giant creatures that have shown up in town, the citizens of Hainesville remain steadfastly blazé as they watch the towering teens make their way to the center of town where they proceed to shake and shimmy to the infectious beats of Jack Nitzsche’s groovy theme. The town sheriff doesn’t seem particularly surprised to see fifty-foot teens traipsing through town either, “I don’t pretend to understand what’s going on around here. In this town, trouble is one thing I just won’t have.”

Who’d have though that the teenage revolution would include so much go-go dancing? Joy Harmon, the most curvaceous of the colossal young ladies, plucks one lucky guy out of the crowd and gives him a ride in her bountiful cleavage. He holds on for dear life as the comically oversized prop sways to the music.

At the theatre, the giants hold court. “We are going to take over this town,” Fred tells the sheriff, laying down ground rules for living under giant martial law. With the sheriff’s daughter as hostage, everyone in town is forced to obey their every command. After they’ve been supplied with endless buckets of fried chicken, the giants gather up all the firearms in town. A disturbing number of shotguns are turned in. Hainesville looks to be the birthplace of the NRA.

The kids attempt a giant round-up using their hot rods and lots of rope. One girl on a scooter weaves a figure eight between Fred’s giant legs. But just when they think they’ve got him hog-tied, the giants capture Nancy. “For the first time in my life,” Fred tells her, “I’m a big man… in more ways than one.” Woah.

With the only road out of town closed and a woefully ineffective sheriff, it’s up to the local kids to save the day. “We’ve got a problem with giants right?” Mike rhetorically asks, “Ever hear of David and Goliath?”

They might be giants, but they’re still red-blooded American boys. Mike formulates a plan that involves the diminutive Toni Basil performing a distracting dance routine while he takes a stand against the gargantuan bullies with a slingshot as his only defense.

While the biblical battle between brain and brawn is reenacted in the town square, the good guys sneak into the theatre, subdue the giant girl on guard, and free the hostages. The oversized breast prop prominently figures into the sequence. Heck, if you’re gonna go to the time and expense of building a pair of giant boobs, you might as well get your money’s worth out of them.

Meanwhile, Mike has lost the fight and is about to get squished when Genius comes to the rescue. While circling the square on his bike, Genius disperses the gaseous antidote that reverses gigantism. Once they’re returned to their normal size, Fred and his gang of teenage hell-raisers have no choice but to hightail it out of town.

Before the final credits can roll, an obvious sight gag must be dispensed with. When the teen troublemakers finally reach their car on the main road, someone off camera asks them if Hainesville is the place with the goo. When Fred answers yes, the camera pulls back to reveal a parade of little people (back then they would’ve been called midgets) on a pilgrimage to become big.

Get it? They’re little, and they want to be big so they…oh, forget it.

In conclusion: One of the things that sets Village of the Giants apart from the other ridiculous drive-in movies of the era is the cast of “rising young talent” that producer/director Gordon managed to assemble. Not only did the film include established young stars like Tommy Kirk, Ron Howard and former Mouseketeer Johnny Crawford, but also featured several young Hollywood offspring. Tim Rooney is Mickey Rooney’s son, beautiful Tisha Sterling is the daughter of actors Ann Southern and Robert Sterling and Lloyd Bridges’ son Beau (who played the villainous Fred) went on to his own successful acting career after Village of the Giants. Joy Harmon (who played the curvaceous Merrie) later found success as a pin-girl and now owns Aunt Joy’s cakes, an L.A. based bakery that supplies baked goods to Hollywood studios.

If you are interested in what the cast members of Village of the Giants are up to nowadays, be sure to check out the Unofficial Village of the Giants Homepage. It’s jam packed with more information than any human could ever possibly need to know about this cult movie favorite. Inquiring minds will find pages devoted to technical inconsistencies, behind-the-scenes info and maps to the films back lot locations. There’s even a page highlighting the memorable skewering the film received on an episode of MST3K.

Village of the Giants is available on DVD from MGM as part of their budget “Midnite Movies” series. The movie is presented full frame in it’s original aspect ratio and without special features. The Village of the Giants disc may be bare bones (not even a trailer) but like the other titles in the series, MGM has found the best available source materials. The movie looks and sounds good.

Village of the Giants is an enjoyable blend of beach party-style shenanigans and sci-fi fantasy. It’s a real piece of drive-in hokum that’s sure to please any fan of Cool Cinema Trash.