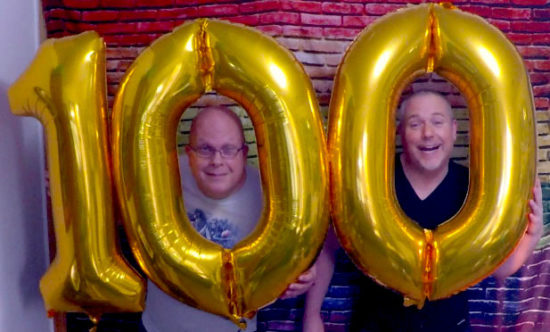 We kick off the 100th episode with champagne and a reflection on the podcast milestone as well as the announcement that they are giving away a Dreamspinner Press $100 gift card, courtesy of Dreamspinner Press. They also toast their 20th marriage anniversary, which comes up on September 7.

I drunkenly review the books Owning It by Devon McCormack and Riley Hart and Off Base by Annabeth Albert. Jeff also discusses K.C. Wells’s Out of the Shadows.

Jeff interviews best-selling author Andrew Grey. They talk about Andrew receiving the RWA Centennial Award as well as his new book, Never Let You Go, which comes out this week. Andrew also talks about how he got started writing, where he gets his ideas and how he keeps up his writing pace.

All this and more celebratory goodness can be found at BigGayFictionPodcast.com!