Quick Review: The Athlete and the Aristocrat by Louisa Masters 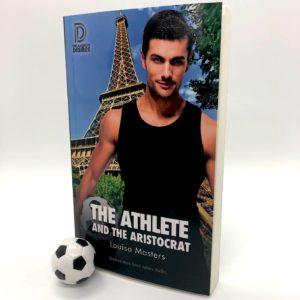 The Athlete and the Aristocrat by Louisa Masters

The athlete of the title is Simon Wood, a world-renowned, but now retired, footballer. And by footballer I mean soccer player.

He’s putting all his time and effort into a new sports charity for underprivileged kids. He gets the backing he needs from the Morel Corporation, with the proviso that Lucien Morel (the aristocrat of the title) serve as business consultant.

Lucien suggests Simon fly with him with him to Monaco for the weekend. They can work on the plane and discuss business plans for the charity for a few days. The chemistry and connection between them is almost immediate, and it’s not long before they tumble into bed together.

They enjoy a wonderful few months of being “co-workers-with-benefits”, keeping everything on the down-low, fearing that any appearance of impropriety would reflect poorly on the charity. That still doesn’t stop them from falling hard for one another and dreaming of a future together.

The charity launch is a resounding success and, just as they’re about to go public with their relationship, a grotesque tabloid story comes out, threatening everything they’ve worked so hard to achieve.

Things, of course, are eventually resolved. What Louisa Masters did with this particular ending left me deeply satisfied as a reader. The kind of ending that makes you simile and sigh because it’s so utterly, completely perfect.

The thing I loved the most about The Athlete and the Aristocrat is the small, cute, intimate moments that Simon and Lucien shared throughout the book on their way to their HEA. It made them more real. Both of our heroes are insanely handsome, wildly successful, and inordinately wealthy – but it’s how they treat each other during their everyday “regular” lives that humanizes them, and makes you root for their love story.

While this book isn’t officially part of a series, it does share a story world with the author’s previous book, The Bunny and the Billionaire. In that book, Leo (Lucien’s best friend) falls for Australian tourist Ben. Leo and Ben both make an appearance in The Athlete and the Aristocrat and are an important part of the story.

The standard series caveat applies, both books can be read as a stand-alone, but you might get more out of it if you’ve read both. Which is what I recommend, simply because both stories are terrific.

Kudos to the audiobook narrator Seb Yarrick. The book is chock full of international accents (Lucien is French, Simon is British, Ben is Australian). He does a wonderful job. If audio is your thing, I recommend you check it out.

This review originally appeared as part of episode 190 of the Big Gay Fiction Podcast.