Quick Review: Trust Me and Believe Me by Avery Ford 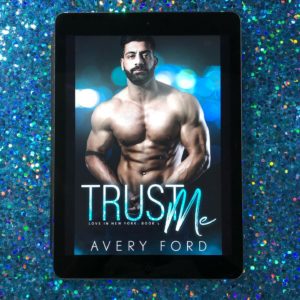 Trust Me (Love in New York Book 1) by Avery Ford

Trust Me is a terrific short read, the first in the Love in New York series by Avery Ford.

Nice guy Milo, who’s busy climbing the corporate ladder of a large-scale forestry conglomerate, is tasked with convincing a recluse in upstate New York to sell his land. Though this guy has rejected every offer, Milo drives into the mountains, confident he can close the deal. Milo’s trip takes an unexpected turn when an incoming storm causes an accident. Milo hits a burly mountain man trudging through the snow.

Jax is a little battered and bruised from his experience, but is okay once he’s able to rest in the cabin he calls home. It quickly becomes apparent that Milo, the cute city boy who hit him, works for the company that wants to buy his land.

Its not an ideal situation, but since the storm has trapped them together in the cabin for the foreseeable future, Jax makes the effort to get to know the guy. Milo’s pretty great, despite who he works for.

They spend the night cuddled in the same bed, for warmth of course, and our heroes definitely heat things up. The next morning, neither of them has any regrets. As they talk, Jax realizes that Milo has no idea how the company he works for is destroying the forest. He shows Milo the nearby logging camp and the devastation they’ve left behind.

With the weather cleared, the road down the mountain should be safe enough for Milo to return to the city. If this is going to be their last night together, then Milo and Jax are going to make the most of every last second. And boy, do they.

In the morning, Jax wants to ask Milo to stay. But they have such different lives, wanting more is unrealistic.

Back in the city, Milo goes into work to tell his boss that the deal wasn’t made, and that he knows what’s going on up on the mountain.

Milo now has to decide what he really wants. A job in the big city, or a life with a sexy mountain man by his side.

Since this is a romance, Milo’s decision shouldn’t come as a great shock.

It’s no surprise that I really loved this book. Stranded in a mountain cabin is one of my all-time favorite tropes and Avery Ford uses it to great effect in this story. I also enjoyed the chemistry between Milo and Jax. In each other, they found something that they didn’t know was missing, which is something that I always enjoy reading – that special kind of romantic awakening.

If I were in the habit of swooning, I would definitely do it over these two and their irresistibly sexy/sweet love story. 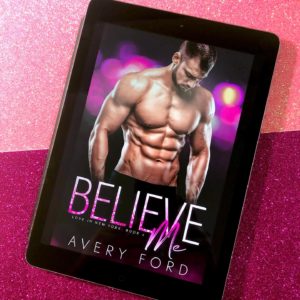 Believe Me (Love in New York Book 2) by Avery Ford

The last thing big, surly, and mostly straight bar-owner Drew Bryant wants to do is take part in a charity bachelor auction. But Alex, Drew’s brother, who is in charge of the event, reminds him that it’s all for a good cause. The auction will raise much needed funds for the LGBT center.

Nice guy Shane is looking forward to the charity event (his best friend is organizing it after all) and Alex asks Shane to bid on his brother, explaining how skittish Drew already is, and it would be just too damn awkward if Drew got up onstage and there were no takers.

The night of the big event, Shane gets in a bidding war for Drew and ends up winning the auction.

They make plans to go on their date the following night. Drew feels a little strange making plans with a guy, even if it is just a “fake” date. But Shane seems nice, and is awfully handsome, so what could go wrong?

As it turns out, absolutely nothing. The dinner date goes perfectly, and Drew finds that he is really into Shane, like really into him. So much so that he even kisses Shane goodnight.

After dropping Shane off at home, Drew decides that one kiss just wasn’t going to be enough, and texts if he can come over.

Shane says yes. They’re not sure what the chemistry between them means, but it’s not something that they want to deny.

Afterward they make plans for a real date, which goes even better than the first, Drew later spending the night with Shane and intimately exploring the crazy hot attraction that they have.

Alex calls up Shane to see how the date went. Unable to lie to his best friend, Shane ends up telling him just how well things have gone with Alex’s “straight” brother. This prompts Alex to have a serious conversation with his big bro. Alex, it turns out, is fine with whatever their relationship ends up being, he just wants to make sure that neither his brother or best friend gets hurt.

A relationship is exactly what Drew wants, just before Shane decides to call things off. Well, if they’re gonna break-up, then Drew wants to hear it from Shane, face to face. Explaining that it was just the fear of getting hurt, Shane admits that he is really into Drew. And since Drew is really into Shane, everything works out for the best. A short epilog shows our two heroes a few months into their new relationship. Their first date may have been “fake”, but the love that they share now is most definitely real.

Just like the first entry in this series, Believe Me is a terrific blend of sweet and sexy romance tropes, featuring two heroes who are likeable and relatable. Though they fall for one another pretty quickly, Drew and Shane’s love is believable and I’m so looking forward to the next book in this series. I have a pretty good feeling that it’s going to be Alex who finds love next, and I cannot wait!

These reviews originally appeared as part of the Big Gay Fiction Podcast.