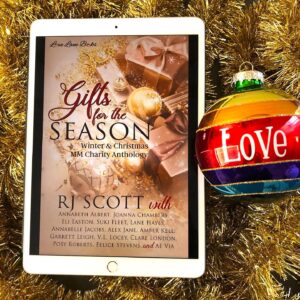 While I haven’t gotten to every story in the anthology, below are some of my thoughts on my favorites that I’ve read so far.

Austin is the successful single dad of the title, and two years ago he hired a handsome and capable manny named Paul. Time is now up, and young Paul is ready to travel the world. Can Austin finally ask Paul to be a permanent part of his rambunctious family? Maybe an eggnog fueled kiss will work, or a trip with the triplets to visit Santa will finally give these two the courage to confess their feelings and grant each other their one true Christmas wish.

Must Be Santa by Annabeth Albert

Features Teddy and Nick from Albert’s full-length Christmas novel ‘Better Not Pout’, which I reviewed (and heartily endorsed) in the last podcast episode of 2018 (episode number 169 to be exact). If you like audio I also recommend that you check the excellent narration of that book by Sean Crisden. Must Be Santa finds our heroes living out their happily ever after and expanding their family with two foster kids. I don’t need to tell you that parenting during the holidays has its ups and downs, but by the time Christmas and New Year’s Eve rolls around, they’re one big happy family.

Is about flashy and fabulous Alec who’s trying to make a go of it as a fashion influencer. One day he gets caught with his pants down (literally) by hunky delivery guy, Grey. They flirt as the packages keep arriving, and Alec even wrangles Gray into participating in live fashion shows for his online followers. Gray eventually encourages Alec to ditch the cut-rate clothes of his sponsor and show off his own creations, all while falling in love in the process. This story perfectly combines ridiculous comedic situations with sweet/sexy romance, which as far as I’m concerned, are the cornerstones of any Clare London story.

Is another story featuring a deliveryman hero, this time it’s Dan who brings a steady supply of packages to Paul, a writer who has a secret admirer that’s sending daily gifts inspired by the Twelve Days of Christmas. Paul enjoys his daily interactions with big, hunky Dan, and finally gets the courage to ask him on a date… on his back patio, sharing some wine and fancy cheese (the gift corresponding with the eight maids a-milking). Eventually they figure out who has been sending the gifts and have fallen for each other in the process.

It should be said that I never, in a million years, wanted to read a ‘love in the time of covid’ story, but Eli Easton has managed to pull off something that is so sweet and charming, she’s made me a believer that romance can in fact happen in a year as fucked up as 2020. Dan and Paul wear masks and practice responsible social distancing throughout the story. Paul’s growing attraction to Dan, despite the fact that he doesn’t know what is underneath Dan’s face mask, is an important part of what makes these characters so genuine and real and kind. When they finally do kiss (after they firmly establish that there’s no threat of possible transmission) it’s sweet and satisfying.

All proceeds from the sale of this anthology go to The Trevor Project.

This review originally appeared as part of the Big GayFiction Podcast.