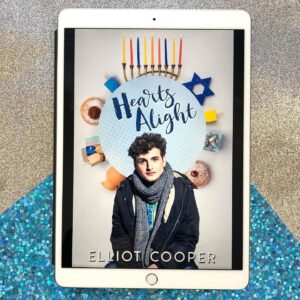 Dave isn’t a grinch per se, but he’s not feeling the magic of the season as he, and his best friend/brother-in-law Jake, fight through holiday shoppers to find ideal Hanukkah gifts. Dave longs for simpler times when it was more about time spent with family and not the materialistic pursuit of the ‘perfect present’.

At Jake’s bar, Dave attempts to chat up bartender Amit, who Dave has had his eye on for quite a while. Dave enjoys attempting conversation with Mr. tall, dark and broody, and any time he gets more than a one-word answer, he sees that as a definite win.

But when Dave finds Amit in the back room, doubled over and unable to catch his breath, it’s clear something is wrong. Jake tells him to get some rest and Dave joins Amit on his walk home.

They make a stop at the nearby art studio where Dave teaches painting, and they talk as they paint dreidels (handmade right there in the shop).

Amit is a man of few words but it’s during this impromptu date that he tells Dave his secret, he’s a golem, a being made from clay and brought to life with magic to do the bidding of others. It turns out that Amit isn’t sick, it’s his magic that is fading. But the meaningful touch of someone special (someone like Dave) helps to recharge him. And it also turns out that the glaze they’re using to paint with, when applied to Amit’s fading tattoo with Dave’s brushwork, also reinvigorates him.

Their first real date is an evening of Chinese take-out and a game of D&D with Dave’s online friends, capped off with a perfect goodnight kiss.

Things continue to go well, even as the holidays increase Dave’s stress levels. They spend the first night of Hanukkah at Dave’s parent’s hose, where he officially introduces Amit as his boyfriend. They’re welcomed with open arms, then eat, play games, and open gifts.

The eighth, and final night coincides with New Year’s Eve. After watching the ball drop on tv, Dave and Amit sit on the porch together, dreaming of their future. They don’t have all the answers when comes to relationships between a human and a supernatural entity, but they’re in love, and whatever problems they encounter, they will happily face them together.

I love sweet holiday stories, like, I literally can’t get enough of them. Gay romances that center around the Jewish holidays are pretty rare, so when I encounter one (especially one this good) I like to shout it from the rooftops, letting everyone know that this story is definitely worth your time.

Nice guys are my catnip (or reader kink if you’d prefer). Dave and Amit’s shy first attempts at connection warmed my heart. Hearts Alight is a super-low angst, feel-good story, filled with lots of heart (just like the title suggests) with just a hint of Jewish mysticism. I think you’ll be rooting Dave and Amit just as much as I was.