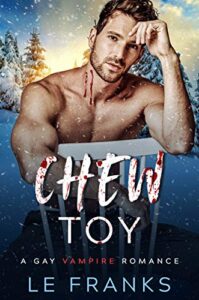 In a remote upscale cabin, deep in the woods, Marc tries to educate his sire on his new way of life, which Morgan isn’t so sure he wants. The two of them spar verbally as he struggles through the traditional stages of grief, eventually coming to terms with his new “life”.

With acceptance comes the need for blood to complete his transformation. His desire for Marc eventually leads to a very bitey roll in the hay that makes Morgan realize an eternity spent with his sexy vampire daddy won’t be such a hardship after all.

My light-hearted recap aside, this short story does a wonderful job of mixing humor with genuine depth, primarily the emotional journey that Morgan goes through as he realizes the reality of the unique situation he finds himself in.