Quick Review: Behind Our Eyes by Geoffrey Knight 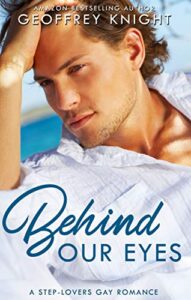 Behind Our Eyes by Geoffrey Knight

Tobias and his adopted brother Thomas have been in love with each other for years. Now that Thomas is out of the Navy, they plan to move in together and open a café in New York.

The brothers, along with other members of the Whitmore family, gather at the family beach house on Montauk to celebrate their grandmother’s birthday. Things go well at first, but eventually several long-held secrets are revealed – including their forbidden relationship. Some family members take the news better than others, but after a heart-to-heart talk and some birthday cake, true love wins the day.

Thank you, Geoffrey Knight, for a compelling read filled with secrets and revelations, family drama, and lots of love.