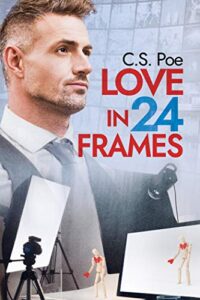 Declan is a CPA in New York City who makes stop-motion animated movies in his spare time. He’s so devoted to his hobby that he rents extra studio space to shoot his films.

He’s secretly been in love with Shota, the studio front desk receptionist, since the day they met. But he can never manage more than a few awkward words whenever they talk. One afternoon, Declan takes refuge from the winter weather inside a corner café and finds that Shota works there as well. They share a bite and Shota gives Declan his number. They begin a slow courtship, Declan bringing meals that Shota can eat at his desk each night. One late evening Declan invites him back to his place where they watch some of his movies. They curl-up and spend a comforting night in each other’s arms.

When a jealous artist places Shota’s job in jeopardy, Declan comes to his defense and keeps him from getting fired.

Using his talent as an animator, he is finally able to show Shota just how much cares in a newly finished film short.

Gay romance just doesn’t get any sweeter than Love in 24 Frames. Watching Declan and Shota take their first tentative steps towards love and eventually reaching their HEA, is deeply satisfying. Through the power of a slow build, the author has a us rooting for these nice guys from the very first page.