Quick Review: The Light by May Archer 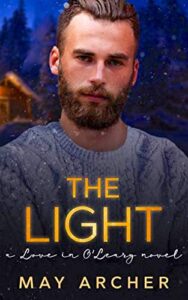 The Light by May Archer

Circumstances have led Mark to the quaint town of O’Leary. One afternoon, in the bakery where he picks up a few shifts, he explains to some of the locals that he once had a romance with Fran, the reclusive guy who lives in a cabin just up the mountain. Mark has stayed in town as long as he has because he’s hoped that one day, he would casually to run into the man he just can’t seem to forget.

That hasn’t happened and Mark decides that he’s going to go up there, see Fran, and finally get some sense of closure. After wrecking his car in the snow, Fran comes to his rescue. It turns out that Fran never forgot Mark either. Life events led them down two different paths, and now that they’re together again, it’s almost as if no time has passed at all. They quickly get reacquainted and make sweet love in the cozy warmth of the cabin.

The next morning, half of the town comes up the mountain with a snowplow to see if Mark is all right. He is fine. In fact, he’s better than fine, he’s precisely where he was always meant to be.

I love (like, seriously love) sweet, low-angst, small-town stories. It’s like the author somehow read my mind and whipped up the perfect gay romance just for me. Mark and Fran are two absolutely wonderful cinnamon-roll heroes who, after some time apart, were able to find their way back to each other and get the happily ever after they always deserved.

The Light is a charming, sexy/sweet, second-chance novella set in the May Archer’s Love in O’Leary series. While series characters do make an appearance, this story can be read as a stand-alone.

Warning: Mark is damn good baker. After reading this story you might start craving one of his special creations. Blueberry pancake cupcakes with maple frosting? Yes, please.