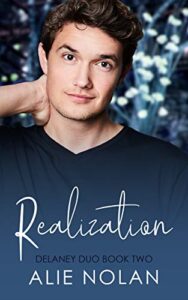 Alone in New York and with no date for Valentine’s Day, Dylan signs up for a new app that sets you up on a blind date, presumably with someone who is you perfect match. Up until this point he’d only dated women, so he is surprised to find that he has been matched with Russell, his father’s best friend and business partner, who is in New York meeting with clients. They decide to go through with the date and end up having a wonderful evening together. When they say goodnight, Dylan hugs him and kisses him on the cheek. Only Russell turns at that exact moment and they accidentally kiss on the lips – not that either of them minds.

Back in San Diego, Russell gives Dylan a call to discuss what happened. Russ liked it. Dylan liked it. What’s the harm in having a little bit of fun? So, Dylan takes charge (which Russ really likes) and instigates some incredibly intense phone sex. They end up talking over the next few weeks, Dylan eventually confiding that he hates it in New York, his job sucks, and the only bright spot in his day is talking with Russell. Dylan’s really starting to like this guy. Maybe he’s more bisexual that he originally thought.

As a surprise for Dylan’s 23rd birthday, Russell flies to the east coast. Upon arrival at his Brooklyn apartment, Dylan leaps into his arms and they’re finally able to do in person what they’ve, so far, only be able to do over facetime.

In their post-coital bliss, they discuss where their relationship is going. They formalize their status as boyfriends who’ll somehow find a way to make their long-distance situation work.

The guilt is starting to get to Russ. He wants to tell Devon (Dylan’s dad) all about the great new relationship he’s in, but how do you even start that kind of conversation?

One day, Dylan decides he’s had enough of New York. He packs is meager belongings and flies home to San Diego. When he arrives on Russell’s doorstep, they reunite with a passionate kiss.

Now an official cohabitating couple, the only thing left to do is tell Dylan’s dad. Devon is shocked when they make their announcement, but Russ is able to explain how much Dylan truly means to him. Understandably, it’s all a little awkward at first, but the at the end of the day it’s happiness that counts.

Several months later, everyone gathers for a celebration of love and friendship on New Year’s Eve. There may even be wedding bells in the future for one of our happy couples.

This novella is the second part of a duology that began with Resolution. Devon found love with Dylan’s best friend Sebastion in that story. I loved that book, and I loved Realization just as much. It was wonderful watching Dylan and Russell navigate their complicated family dynamics on the way to their very sexy happily ever after. Author Alie Nolan really knows how to craft a compelling read that really delivers on some beloved and time-honored romance tropes – age-gap, father’s best friend, bisexual awakening. I enjoyed both books in the Delaney Duo and think you will too.