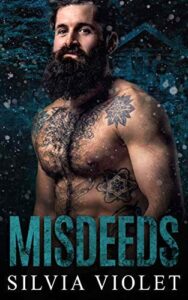 In need of an escape for a few days, Ainsley attempts to make the drive up to his friend’s place in the mountains but gets lost when a snowstorm hits. He comes across a remote cabin and goes in looking for help.

Oran doesn’t trust his unexpected visitor at first. But it soon becomes clear that the good-looking city boy really is just lost. He can’t go back out in the bad weather. He’ll have to stay the night, so Oran offers his bed… but only if he is willing to pay the price.

Ainsley would do just about anything the sexy mountain man asks, good thing he likes taking orders, and Oran likes giving them. After a deeply satisfying rough and tumble night together, Ainsley awakens to the delicious aromas of a hearty breakfast. After eating, they give in to their desires again in front of the fire.

Their sexual chemistry is undeniable, and they find they like each other’s company so much that Ainsley stays for the remainder of his vacation. But when it’s time for him to head home, an injury, paired with a mysterious phone call, forces them to have an honest conversation about Oran’s past and what each of them want for the future.

A cozy mountain cabin, an irresistible mountain man, a precocious pup named Brute – Misdeeds has got it all, including some seriously scorching hot love scenes. Nobody writes emotional sex, with just a hint of kink, quite like Silvia Violet. Oran likes to be in charge and Ainsley is more than willing to give his dominant lover anything he wants.

This short novella is a great introduction to the author’s Vigilance series.

Misdeeds is available in both ebook and audiobook formats.