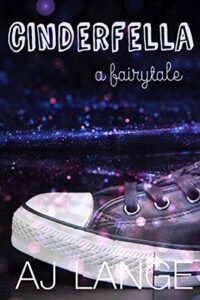 As you can most likely tell from the title, this short story is a gay twist on the classic fairytale.

When Jamie isn’t at school, he’s busy avoiding his stepmother, or working at the local diner where he diligently scrimps and saves for the day that he can finally leave his small-town behind.

But it’s not all bad. He likes hanging out with his youngest stepsister Alexa, looking out the window of his attic bedroom and stargazing… dreaming of bigger and better things.

Then there’s Wyatt, son of the mayor, star of the high school baseball team, and way too good-looking to be interested in someone like Jamie. Wyatt is just too dang nice and keeps asking Jamie to tutor him in chemistry. What’s his angle?

Alexa is excited about going to prom but doesn’t want one of her sister’s hand-me-downs. Jamie takes her to a consignment shop, and they find the perfect dress, but it’s too much for their meager budget and she’ll have to make do with a less than ideal frilly purple monstrosity.

On the night before the big dance, everyone gathers at the lake for a bonfire. Wyatt attempts to chat with Jamie, but what are you supposed to say to the most perfect boy in the world? To escape the awkward small-talk, Jamie kicks off his shoes and leaps into the lake. Wyatt jumps in after him to save him from ‘drowning’. Jamie’s life might not be perfect, but he certainly doesn’t need a prince to swoop in and save the day.

Jamie uses his savings to buy the dress that Alexa really wanted. She is ecstatic and he heads to the diner for the night shift, but his co-workers aren’t having it. They loan him a suit so that he can go to the dance with the man of his dreams.

When he arrives, Alexa tells him that Wyatt left when Jamie didn’t show. There’s one last place he might be.

He finds Wyatt at the lake, with Jamie’s shoes from the night before. They flirt awkwardly, but when Jamie finally gets to kiss his handsome prince, it’s the perfect end to a rocky courtship. After graduation they make plans for their own fairytale ending… only it’s not an end, it’s just the beginning of their new adventures together.

I really enjoyed this queer young adult spin on classic cinderella themes. Author AJ Lange took the traditional situations that we all know and love, and made them fresh, fun, and modern. I also found the awkward interactions between Jamie and Wyatt to be endearing and completely adorable. They’re just two young guys in love who have no clue what they’re doing or how to express it. A happily-ever-after has never been so sweet.

If you’re in the mood for a short but satisfying fairytale, I think Cinderfella just might the YA romance that you’ve been looking for.