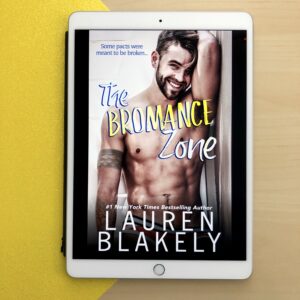 The Bromance Zone by Lauren Blakely

River and Owen have been friends since college and that friendship is so important to them that they made a pact to never sleep together because sex always complicates, or outright ruins, a perfect friendship.

Owen invites River to a Friendsgiving get-together in Tahoe. It should be a fun weekend. As they each individually get ready for the trip, they talk with friends who ALL seem to know that the two are meant for each other. Admittedly, they’ve each secretly thought about “going there”, but it’s not going to happen. This trip is about friends having fun… it’s not a romantic getaway.

As they leave the Bay area, River mentions a quick pitstop to check on a friend’s vacation cabin in the mountains, making sure it’s ready for any bad weather. He’s downloaded some podcasts for the dive he thinks Owen might like (since he hates River’s preferred true crime/murdery ones).

They chat as they River drives, and the topic turns to past relationships and what Owen is looking for in Mr. Right. River wonders if he’s the guy for Owen and shamelessly flirts with him while buying snacks at a gas station. Whether looking at pics of River’s beloved dog, or parsing life lessons from the movie Clueless, they flirt their way through the rest of the drive.

When they reach the cabin, the weather has taken a turn. Snow has started coming down hard and fast which is how River will fall if he’s alone with Owen, insisting that they can still finish their trip to the rented Airbnb in Tahoe.

But they’re not going anywhere. After messaging their friends about the situation, they settle in for some booze, snacks, and a game in front of the fire. A possessive shock runs through River when he catches a glance at Owen’s phone, and the dating app he’s downloaded.

They look up dirty questions for a game of ‘Would you rather’, and after a few rounds of telling each other what they like sexually, and exactly how they like it, their flirtation from earlier is taken to a whole other level.

In the morning a friend arrives to drive them to the party house in Tahoe. But with all his friends and colleagues there, Owen can’t catch a moment alone to talk privately with River.

At dinner the topic of meet cutes comes up and when Owen and River explain that they’re just friends, the conversation turns to what they’re each looking for in a guy. The answer is each other (of course), but neither is willing to pull the “we’re boyfriends” trigger, especially not in front of everybody, and not without talking to each other about it first.

The discussion goes on and on and Owen is the first to crack. He blurts out that he has met someone special and that someone is his best friend. He makes a break for it, but River catches him outside and they sweetly express (in their adorably flirty way) their heartfelt love and adoration before going back inside to officially declare themselves boyfriends.

On the drive back from their momentous weekend, they decide that since the friendship rule is kaput, they need a new pact. A boyfriend pact – to always be good to each other, both in and out of bed. And since this is Owen and River we’re talking about, they prove just how good they can be to each other as soon as they get home.

What can I say about The Bromance Zone other than I loved every moment of it and fell in love with the round-about way these two best friends finally found their happily ever after.

From a storytelling perspective, the plot is pretty straight forward – short road trip, snowed in, hook-up, HEA. What makes this book so special, in my opinion, is the characters themselves. Author Lauren Blakely has crafted two very believable friends who, through their witty banter and fun flirty dialog, have obviously been through a lot together, and care for one another deeply. The dialog is so fun and real that I bought into River and Owen’s romance from page one. It’s so real that I wish I could hang out with these two in real life.

The Bromance Zone is a standalone that’s loosely connected to the author’s Men of Summer trilogy. River and Owen are introduced in those books, and the Men of Summer heroes make an appearance here, but reading those previous stories aren’t necessary to enjoy Bromance.

The audiobook, with shared narration by Vikas Adam and Evan Parker, is wonderful. Each voice actor does a great job bringing these distinctive characters to life.

This book ticked all the boxes for me. Great characters who know how to talk to each other, explosive on page chemistry, a fun riff on the classic friends-to-lovers/forced proximity trope. All in all, there isn’t just one thing to recommend about The Bromance Zone, I heartily enjoyed the whole damn thing, and I think you will too.