I mentioned last week that I’d done an interview for the Village Voice for an article about NYC athletes going to either the Gay Games in Chicago or the 1st World Outgames in Montreal. I was one of three Wizards interviewed and on Saturday afternoon David Benaym and I took part in a photo session for the article. 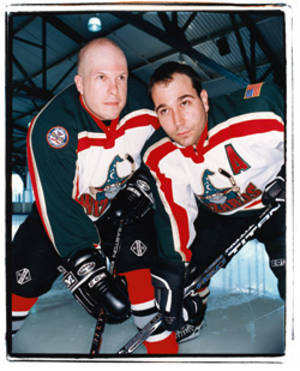 The pictures were shot very quickly between the Ordinals game and the Wizards game, a convenient time since I was coming off the ice and David was about to go on. Even with the short time, I think the photographer shot more than 150 pictures shot between the two of us. David and I both did some solo shots plus shots of us together, both on the ice and off. It was pretty crazy… move this way … look over here … glare at each other … move your head just a bit to the right … move the stick over … slide the glove a bit to the left … look more intense … drop your chin … perfect.

It was a lot of fun and I can’t wait to see how the pictures turned out. The photographer said he’d be able to hook me up with some of the different pictures, even the ones the paper doesn’t use. If that does happen, I’ll post some to the website. The article, which is part of the Voice’s “Queer Issue,” is due on stands June 22.

This is a big week because it’s Chelsea Challenge week. This week I’ll post a lot about what happens there, which will certainly be an overall good time, but will also hopefully include some winning hockey as well.

As for last weekend’s hockey, another bad week for my teams: The Ordinals crashed with a score of 2-13 and the Storm racked up another loss, 2-7. However, for the Storm it was a well played game, it just happened it was a contest between the first place team (Blizzard) and the last place team (us). The team though really played well and never gave up. If we keep playing like that, there are wins in our future.