The opening ceremonies were absolutely spectacular! It started with the spectacle of the thousands of athletes marching into Montreal’s Olympic Stadium, with each country announced. It was a very emotional moment for me, marching with my teammates and marching in with all of the other LGBT athletes… with thousands in the stadium watching the show…plus TV audience on Radio Canada TV.

I really don’t have the words to describe the feel of awesomeness and camaraderie that it was.
After we were all in, there were official welcomes from politicians, including the Mayor of Montreal who spoke so positively about the important mission of the games to further not only tolerance but human rights. There was also a representative from the federal government of Canada. Someone who was clearly not at all liked by the home town Montreal crowd because he was roundly booed… to the point Montreal’s mayor came back to the mic to chastise the audience for not treating their federal representative with respect.

Then Martina Navravoltovia (tennis champion) and Mark Tweaksbury (an Olympic Gold Medal swimmer) presented the Declaration of Montreal, which will be delivered to the UN as a declaration of LGBT Human Rights.

I can’t say enough about how much this coming together of everyone to start the games was one of the most incredible things I’ve been a part of.

Here are a few pictures from tonight. I’m going to post more in the blog as the week goes on, and then once we’re home there’ll be a lot more on the site too. 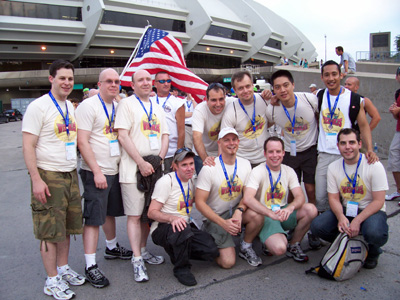 The team outside the Olympic Stadium before marching inside. 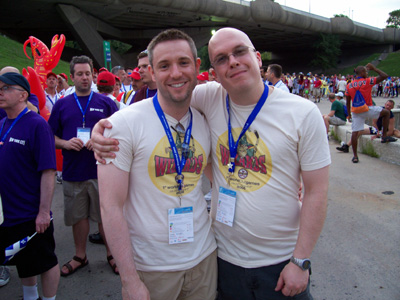 Will and I getting ready to go inside. 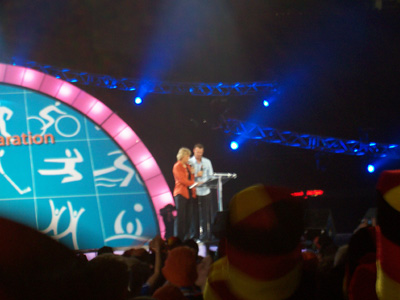 Martina and Mark present the Declaration of Montreal.

Tomorrow the sports start up and we’ve got a scrimmage against the other NYCGHA team that’s here. It’ll be great to play in our team configuration before we get down to serious business on Monday afternoon.