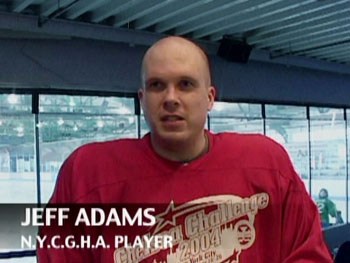 Two years ago, during Chelsea Challenge 04, I did an interview with Spencer Windes for a documentary he was doing about gays and lesbians playing rough sports. He was talking to hockey players, rodeo riders and rugby players. The interview became part of Windes’ film Straight Acting, which made its world premiere at NewFest (the NY LGBT Film Festival) in June 2005. Unfortunately, I didn’t find out about that until the premiere had already passed. So it was just tonight that I saw the film for the first time.

It was great to finally see the outcome of all the interviews Windes made. He spoke to a few NYCGHA players during the tourney that year, including Jeff Kagan and Kevin Jennings, and Windes also checked out the rugby and rodeo scenes too. The film also tells Windes’ own story of coming out and his discovery of gay rugby, which he used as a reason to loose a couple hundred pounds and to go out and get involved in the sport. His interview subjects also discuss why they got into sports and what it has meant to their lives. Plus, there’s the question that the title of the movie is based on, “What does the term ‘straight acting’ mean to you?” It’s no surprise that most of the people in this movie don’t really care for that term.

Thanks to Danny for hooking me up with a copy of the film!