This Is Not Over

Thursday’s game against the Wizards did not have the outcome we were hoping for as the Ordinals lost 6-1. The Wizards had the Andrej / Vince / Brian machine running at full speed and that proved hard for us to stop, even though I kept laying out the strategy at every opportunity. We got better at it by the third period, but it was already too late. It was odd, our entire defense seemed about a step behind the whole night, maybe because it was a Thursday. Meanwhile, while our offensive attempts kept up some good pressure, we were also shooting against Peter, which is never an easy thing.

The good news the Ordinals can still make the playoffs. We must beat the Tsunami on Saturday. Tsunami I’m sure will be tough since they are battling for the same playoff slot we are. At the same time, we also need the Wizards to lose on Saturday (it’s hard for me to cheer against them, but in the case the Blizzard really need to win for the sake of the Ordinals playoff dreams). I’m not sure what happens if both teams win, I don’t know the tie break rules well enough to know how that would sort out).

I also re-hurt my hand a bit last night. Andrej managed to shoot a slap-shot right into my hand. I suppose it’s good I blocked the shot, but wow did it hurt. Luckily it happened with about two minutes to go in the game so I was able to not have to go out and take another shift and cool it off against my Powerade bottle. I am getting a little concerned about the hand because even now that the main injury is not hurting any more, my hand is stiff, especially when gripping things. That’s even more true after getting clobbered again. If the stiffness isn’t gone by the end of next week, it might be time for a doctor.

Some of the first ever Ordinals action shots were taken Thursday as well. A friend/co-worker who has been here from Latvia came to the game and took some photos. Here are some of them… 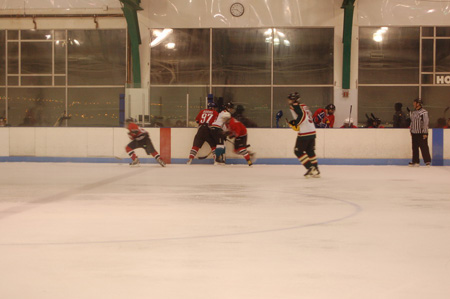 This photo shows the beginning of how we got our only goal. I was battling against the boards with the Wizards’ player. Roman got it out of the melee and Joe took off to make the goal! I nabbed an assist on this one. 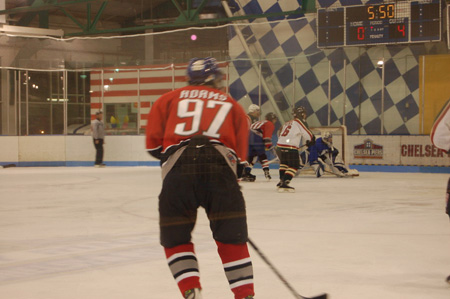 Defending the blue line to keep the puck in the zone. 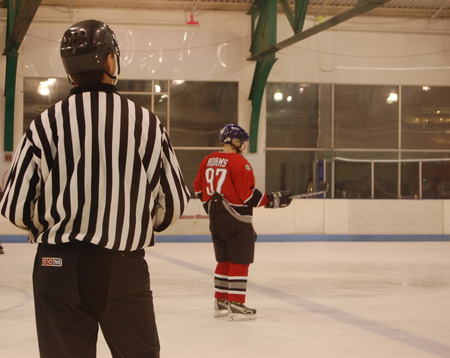 This one just looks artistic somehow to me. I figure I must be waiting on a face off to happen within the zone since I seem to be just hanging out.