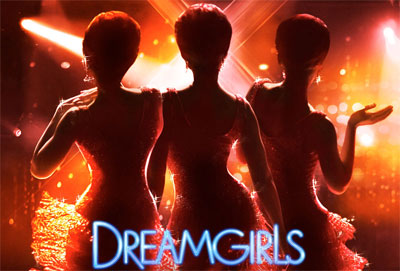 An early Christmas present came this week as we found out that we won free passes to an advanced screening of Dreamgirls. We went tonight (conveniently it was at the theater just 5 minutes walk from our apartment), so we had the privilege of seeing it even before it opens it the limited roadshow release tomorrow.

It lives up to all the advanced press and reviews that have come out about it. Jennifer Hudson is amazing as Effie, the Dream who is ultimately pushed out of the group as they get their break for the big time. Eddie Murphy has a role unlike any other he has ever played, and this is no doubt the role of his career thus far. Beyonce is great as the singer who takes center stage from Effie. Tony winner Anika Noni Rose was also stunning as the third member of the group. It’s a very slick movie, very entertaining and will no doubt rack up at awards time (it already picked up 5 Golden Globe nominations today).

Jennifer Hudson is definitely the break out star of the show. Not only does she command every scene she is in but she simply nails her role as the diva Effie. Her departure from the group, and break up with her man, leads to the standout number from the musical “And I Am Telling You.” The number made Jennifer Holliday a star 20 years ago, and now Jennifer Hudson makes the song her own, delivering a performance that will bring down the house, even in a movie theater.

The one flaw with the film is when the characters break into song in mid-plot. Most of the musical numbers take place on stage or in the recording studio. But there are a few times (I think there were three) that the characters break into song in mid-plot and, with the exception of “And I Am Telling You,” this does not work. In fact, the first time this happens is about 50 minutes into the film, so it’s rather unexpected at that point. Chicago went with all of it’s musical numbers on stage or in Roxie’s imagination and other recent film musicals like Rent and The Phantom of the Opera embraced the fact they were sing-through musicals. This movie tries to split the two worlds and it is a bit jarring.

But even with that, it’s still a great picture. It looks like the movie musical isn’t dead after all (after the lukewarm reception of Rent and The Producers last holiday season the genre was certainly comatose). It looks like this movie will last far longer than “One Night Only.”