All Aboard Ark II 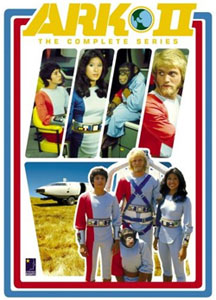 I was excited when I heard that Ark II was coming out on DVD. The series was part of CBS’ Saturday Morning lineup in the Fall of 1976. It was back in the days of live action children’s programming, in the same era as the original Land of the Lost and the Shazam/Isis Power Hour.

Ark II focused on a team of young scientists along with their talking chimp who traveled a barren earth following the decline of civilization due to not caring for the environment. As such, not only did the series preach about the dangers of not taking care of the planet, but, like other shows of the time, also had a morality tale to tell.

We watched the first four episodes tonight and learned how everyone had something to contribute to society, the importance of not allowing yourself to become a slave because of your fears, that everything could be used for good or evil (and that we had to chose to use things for good) and that power had to be used to better society not to merely rule. All very good lessons indeed, and still relevant today, 30 years later. It was also cool to see the “futuristic” vehicles on the show. The RV-esque Ark, the Roamer and the Jumper flight pack (which you find out on the commentary track actually worked for about 30 seconds at a time, so the stunt man actually did fly).

It was a great trip down TV past. And we will definitely pick up the remaining three discs (there were only 15 episodes) off of Netflix. Who would have thought that a kid’s show that no one seems to remember (at least as far as I can tell… no one I’ve talked to seems to remember Ark II) would show up on DVD. Proof positive that anything can be offered up these days. Now if they would just release Cop Rock… I could use an upgrade from the VHS tapes I recorded when it reran on A&E around 1992 or 93.