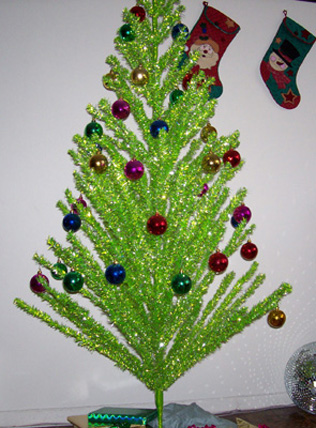 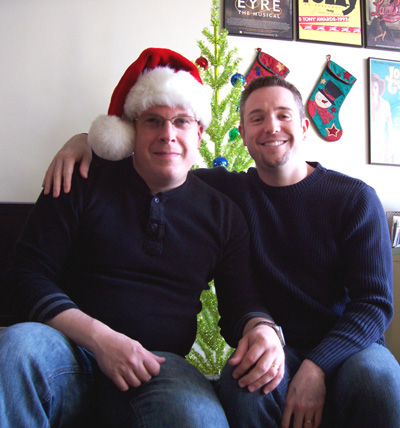 Merry Christmas Everyone! We were out and about today enjoying some Christmas Eve activities. We started off taking a couple pictures in our apartment. Pretty obvious what these are–our Christmas tree on the left. We bought this a couple years ago at Urban Outfitters and just love it. Something about the tinsel with a minimal number of ornaments has just been working for us. And then, on the right, this year’s official holiday picture.

Today we went to see our annual Christmas show. This year’s selection was Grey Gardens, a new musical that focuses on the Edith and “Little Edie” Beale, who were the aunt and cousin, respectively, of Jacqueline Kennedy Onassis. The play takes place in two different times. Act I is set in 1941 as preparations are under way for Little Edie’s engagement party to announce her upcoming marriage to Joseph Patrick Kennedy Jr. Those plans fall apart though, forcing Little Edie to flee from the mansion. Act II jumps forward to 1973, with Little Edie and Edith living in squalor in their mansion and the Suffolk, Long Island Health Department filing suit for the women to clean up the house, which has become overrun with cats, or move out. 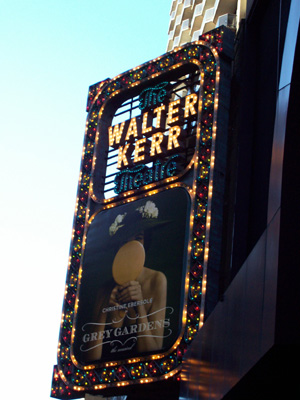 It’s a devastating show, showing these two women go from the prime of their lives to going mad and living in seclusion. This musical opened earlier this year off-Broadway and just opened on Broadway last month. It’s a star turn for Christine Ebersole, who plays Edith in Act I and Little Edie in Act II. She won many of the off-Broadway awards in May and June this year for this role and she seems a sure bet for a Leading Actress Tony this year. Watching her shift from the confident, but fragile, Edith to the broken and slightly mad Little Edie is amazing. And Mary Louise Wilson as Edith in Act II is wonderful. Ebersole and Wilson together make the second act funny and yet sad at the same time, knowing that these two can never be separate from each other, even if that is what they really need to be. All-in-all it was a fantastic show and it is sure to capture lots of awards again for this Broadway production. Coming up later this week we’re going to watch the original Grey Gardens documentary that was shot in the early 70s and documented these two women in their dilapidated mansion.

After the show we braved the crowds–and we do mean crowds–to go check out the tree at Rockefeller Center. It was only four blocks away from the theatre, but it took forever it seemed to get there. The warm temperatures here (it was in the mid-50s today) had everyone out and about. It was still worth the trip though because the tree was beautiful. So there you have it, we open this entry with a new-wave tinsel tree and close out with a real evergreen, massive tree! 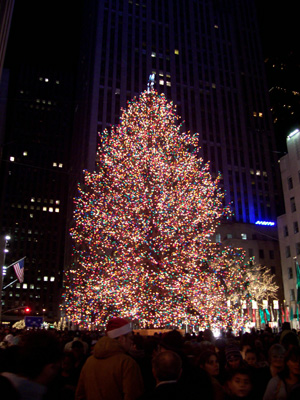