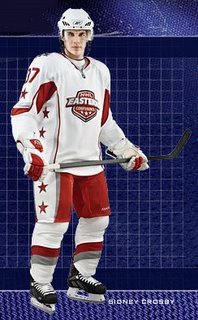 Check out the new NHL uniform that makes its debut tomorrow night in the All-Star Game. That’s All-Star Sidney Crosby modeling the new uniform, which he has been raving about this week in the activities leading up to the All-Star Game: “With me, a lot of times I have problems with pants like on the inside of the leg because they’re a bit tighter,” Crosby said. “With these ones, it was trial and error, we made it so that it doesn’t matter how big your legs are they wrap right around your leg and conforms right to it. That’s really nice.” Overall, the uniforms are made of modern material that makes the new uniforms lighter, cooler, slightly tighter, more stretchable, and more water-resistant.

You can learn all about the RBK Edge Uniform System at its website.

While the All-Star Game marks the uniforms debut, it will take until the 2007-08 season for the uniforms to be used throughout the NHL.

They may need that long to get fan approval for the new look. Some are criticizing it already: “These tight fitting atrocities fit to the form of the players, making them look more muscular,” says one blogger. “I don’t believe that it is worth sacrificing the games sacred emblems and logo’s for these vertical streamed disasters. Hockey jerseys are the most treasured jersey in sport. This is not some baseball shirt or flabby basketball muscleshirt the NHL is tampering with, it is the most unique and beautiful paraphernalia in all of sport.”

I’ll admit that I’m not a fan of the color scheme shown in this highly stylized promo shot from the RBK site, but I think once we see some of the team’s colors and logos on these uniforms, they could be pretty cool.