I’ve spent the past three days in Alabama visiting my mom. It’s been almost exactly a year since I was down here last to help my mom move into a new house. This trip was centered around providing her tech support by installing a new computer and getting DSL up and running (her old computer was awful and DSL had finally become available in her new neighborhood and it was just time for me to come take care of it). It’s been a good trip seeing her, as well as catching up with some friends here too.

The trip started off a little oddly when I arrived on Thursday morning. Avis was out of cars! I’m not even sure how that can happen really. I could only choose a huge white van/SUV (I’m not sure which it is) or a Ford F-150 pickup, which is equally huge. I ended up with the van because the guy who was being waited on at the same time I was took the truck. Check out the size of this vehicle: 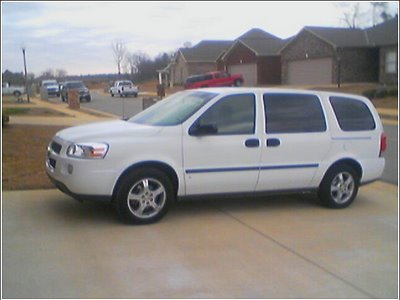 I’ve never driven anything this large that was not a moving van! It seats 7, so I could take 1/2 of my hockey team with me, plus their gear. It was crazy. I basically drove it to mom’s house and then started driving her car because I didn’t like this thing at all.

Thursday night I also met up with two of my best friends, who I only see on the rare occasions I get down here. Angela, Cheryl and I were inseparable, along with a small tribe of other folks, throughout college. Angela embarrassed us greatly by bringing this picture from 1989… this is my place–clearly belonging to a very geeky Star Trek fan. 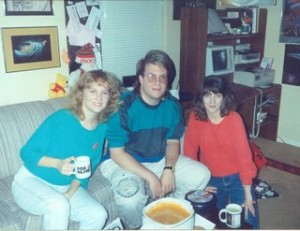 We had our gathering at a place we always use to hang out in Tuscaloosa, a great restaurant/lounge called Kozy’s. It is amazing that a bunch of college kids found this place, because it’s really more ritzy than college kids would hang out at, but it was a great place. And it had a great jukebox, fully of 50s and 60s soul/R&B/rock. Sadly, it’s gone now, but the food, the drinks and the atmosphere are great. We snapped a picture there too, which coincidentally has us sitting in the same configuration. 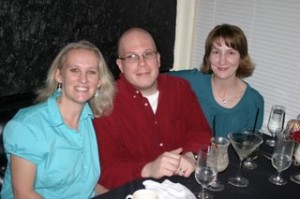 Have had some great comfort food while I’ve been here too. My mom cooked up roast beef, which was great to arrive to. Plus we’ve been to Cracker Barrel (I know I’m supposed to boycott that because they tend to be anti-gay, but I’m sorry… I need the biscuits and gravy), and to IHop and Mr. Bills, which is a local place with crazy good food. Tonight I get home cooking again as we go see some good friends for dinner.

Tomorrow morning I head home, and hopefully dodge the weather that is suppose to come through Alabama tonight and hit NYC tomorrow night. It’s been a good trip, but I certainly miss Will… so it will be good to get home and see him.