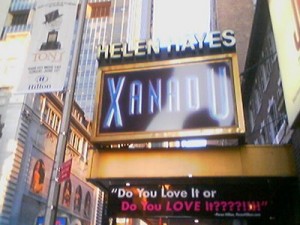 Xanadu was a fun, fun, fun 90 minutes at the theatre. I was grinning from the moment the opening notes of “I’m Alive” played and all the muses who were sad that Sonny was doubting his art decided they were going to help him! Kerry Butler played a great Kira, at times positively channeling (or in some cases parodying) Olivia Newton-John. Tony Roberts was a good choice as Danny. James Carpinello as Sonny was full of enthusiasm… plus he’s just down right hot to look at.

Truly stealing the show though were Jackie Hoffman and Mary Testa as evil muses Calliope and Melpomene who are out to bring the wrath of Zeus on Kira because they are tired of her being in charge of the muses. These two are wickedly funny and get some of the best songs with “Evil Woman” as well as large parts in “Strange Magic” and “Fool.” Another cool, yet odd, musical turn was Roberts singing with the 80s rock version of “Dancin‘” and, while playing Zeus, taking part in “Have You Never Been Mellow?”

Douglas Carter Beane’s script is full of 80s in-jokes as well as some good theatre jabs. My favorite comes towards the end when Melpomene is complaining to Zeus how Kira was getting off easy and that the end should be tragic but Zeus replied that the end would be short and happy. Melpomene’s reply (which I may not be quoting exactly right here): “Short! They aren’t even to the first barricade across the street yet.” Yes, Les Miserables is playing across the street… and she’d be right, we got out right around 9:30, which is barely into Les Miz‘s intermission.

And, yes, there is a roller disco “Xanadu” extravaganza to cap of the show too! True, it’s not the cast of hundreds like the end of the movie, but they do a great job on a small stage. The other bit of theatre magic is how the muses come alive at the beginning of the show coming out of Sonny’s mural–just like in the movie.

We recommend Xanadu 100% for a night at the theatre that will leave you smiling (we’re pretty sure anyone will have a good time, but if you’re predisposed to 80s camp you will be in heaven). It’s not high art, it might not even get Tony nominations in 2008… but you will have a blast!

And, one more thing… while we had great seats in the mezzanine, there are about 20 or so seats on the stage! How fun would that be? We’re already talking about maybe going back after the show opens (tonight was only the second or third preview performance) and sitting amongst all the glittery magic.