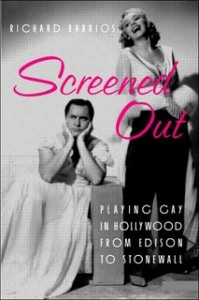 All month long TCM will be running a series of movies dedicated to the representation of LGBT characters in Hollywood film. Every Monday and Wednesday night there will be a new batch of classic films and each night will carry its own theme. The mini film festival begins tonight with “The Early Years” and looks at several different films from the 20’s and early 30’s. Upcoming nights will focus on Gays Before the Code, Men and Women Behind Bars, Film Noir and Crime, Horror, Comedy, Code-Busters and Out and Open, a night that will feature the Stonewall era classics The Boys in the Band and The Killing of Sister George. Each evening will be hosted by Robert Osborn and co-hosted by author Richard Barrios whose book, Screened Out: Gay Images in Film, serves as a textbook for the film series. I don’t know about you, but my DVR will be working overtime during the month of June.