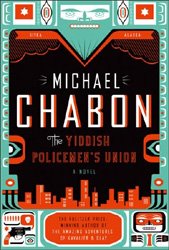 This book was thrilling and I’ve been struggling with how to describe it as I started wrapping it up this week. So, I borrow the description from the Publisher’s Weekly review of it: this novel is “a murder-mystery speculative-history Jewish-identity noir chess thriller.” And that describes it about as simply as can be. The Yiddish Policemen’s Union has it’s foundation in the premise that a proposal Franklin Roosevelt put forth just before World War II, to provide a temporary Jewish settlement on the panhandle of Alaska, actually happened. As the story opens, the citizens of Sitka have about six weeks before the land they reside on reverts back to the U.S., leaving them with nowhere to call home. In the midst of that, there’s a murder mystery (possibly the murder of a messiah), clues left in a chess setup, the rekindling of a marriage, the redemption of a weary cop and much more.

The reading was slow going at times as I worked through the numerous plot threads, trying to keep everything straight. And the effort was worth it. It’s not often I come across a novel that makes me think so much. Chabon crafted an amazing story where even the most disconnected plots come back together at the end. I think everyone who wants to write should read this, even if you don’t find the plot to be in your normal reading genre. The story shows the art of writing at it’s finest with precisely drawn characters and plot. It was also a lot of fun to read about a parallel America, where things are quite different but also quite the same.