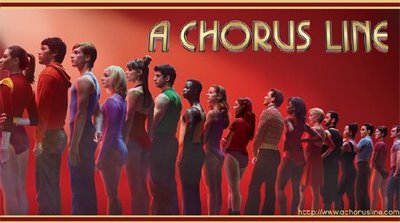 It was a little disturbing to me to figure out that I first saw A Chorus Line 26 years ago. I was 12 and the national tour came into the Birmingham-Jefferson Civic Center. It was February 1981 and the show was out on its first bus and truck tour. I can’t remember why A Chorus Line was on my radar at the time, but it was my first Broadway theater experience. I’d seen some community theatre, but never a full-blown touring show. I remember devouring the cast album for weeks before and after seeing the show. Somewhere, in some box, the program for this performance is stored.

The new cast is among the best I’ve seen in the show. Michael Berresse is great as Zach; Jason Tam is moving as Paul; Natalie Cortez was delightful as Morales. We didn’t get to see Charlotte d’Amboise in her Tony nominated performance as Cassie (I guess she had the day off), but her understudy did a great job.

This show still has a major affect on me. The individual stories of the dancers–how they came to be dancers; their defining moments (from a bad drama teacher, to accidentally revealing to their parents that they were gay; from ballet class to deciding that it might be time to end their dancing career)–it’s an incredible fusion of drama, music and dance. No wonder it won the Pulitzer Prize for Drama in 1976… and no wonder that it’s just as powerful on stage today.

Check out the clip below to see the current cast. This is from this year’s Tony Awards when the ACL cast opened the show. The clip opens with “I Hope I Get It…” (then you can skip over the list of award presenters) and wraps up with the signature number “One.” You can also check out an interview Josh & Josh recently did with Michael Berresse.