Friday Geek Out: Beauty & The Beast 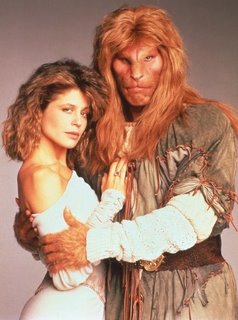 One of my favorite 80s shows has shown up on DVD this year. Beauty & The Beast Season 1 hit stores just in time for Valentine’s Day and Season 2 was released just last week. It has been wonderful revisiting this series, which I was a faithful viewer of during it’s 2 1/2 year run on CBS (1987-90) as well as its rerun life on Sci-Fi Channel in the 90s.

The story took the beauty and the beast premise and gave it a new twist. The beast, Vincent, lived in a community below New York City. The beauty, Catherine, was a well-off New York lawyer. The two met when Vincent saved her from an attack and nursed her back to health. After that, the two form a strong bond and Vincent seems to turn up anytime she is in trouble.

Of course, the series used their differences–as well as the “class” difference between those who lived above ground and those who lived below–to tell many morality tales. There was also a good bit of love story since over the course of the two seasons that Linda Hamilton was on the show the love between Catherine and Vincent grew steadily. Hamilton left the series at the start of the 3rd season, which meant Catherine had to die… and ultimately the show died too because it never quite had the magic after that.

I’m currently in the middle of the season 2 discs and enjoying it a lot (even while Will scoffs at how cheesy the whole thing is). Yes, it is a little cheesy 20 years later, but it’s TV comfort food.

Here’s a YouTube video that a fan put together using clips from the show and a song from the show’s soundtrack CD.