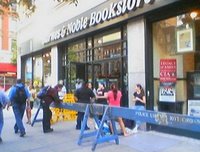 759 Pages to Go: I, like many, got my copy of Harry Potter and the Deathly Hallows today. I’ll be reading it over the next couple weeks. I wish I could read faster, and avoid any spoilers that may come my way but it is the best I can do with my overall time these days. The Potter madness got started pretty early in Manhattan yesterday. This picture is from the Barnes & Noble store on the Upper West Side. At about 8:45 a.m. yesterday there were four people already in line for that night’s book release party. That’s dedication, especially when you consider how easy it is to reserve the book or get it online (a path I’m glad I took this year). 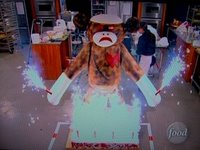 Bionic Miscasting: I’m sad to read that Isaiah Washington has landed a five-episode role on NBC’s new take on The Bionic Woman. I was looking forward to that show since I liked both Bionic Woman and Six Million Dollar Man when I was a kid. But I’m not sure I can support a show that supports Washington.

A Vote for Cherry! In some cool casting news, Cherry Jones has been hired as the next president of the United States on 24. The seventh season starts in January.