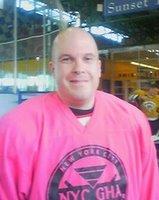 I played for the NYCGHA’s Pink Panthers last night as a last-minute sub to help them round out their bench. It was a good time. I haven’t played in D8 in a couple months and it was great to play with some friends I haven’t been on the ice with of late. And, I got to wear the groovy pink jersey too.

I also scored last night in what can only be called a Bluesteak special. I was playing defense and got the puck on the blueline while I was along the boards. I quickly set up and got a beautiful wrist shot off, just a little bit off the ice and with a fair amount of power behind. And, according to the people standing at the net, it went right over the goalies pads and into the net. I was ecstatic. It felt right, it look good… and most of all it was a goal. Unfortunately, the Panthers still lost. The final score was 6-2. I was glad to contribute to what I could.

It was a losing night for the Ordinals too. After such a strong game against BNP last week. We collapsed badly against the Knights. We’re playing wildly uneven games right now. An 8-1 loss against the Sled Dogs two weeks ago, a shoot out win over BNP last week and now a 9-1 loss against the Knights. I think a lot of it is mental because we opened pretty well with a solid first 8 minutes, but by the end of the second we were down 7-0. I tried to point out between periods that we were just being sloppy–everyone on one side of the ice, not playing positions, not playing our passing game and just make some really bad choices.

We had a pretty good second period, that period was only a 2-1 loss. Plus, we had many minutes of offense that just didn’t convert. We’ve got to get to a point we can play a more consistent game.

That said, I still think I played okay. I had a couple bad lapses of judgment, that usually Andrew or Evan bailed me out of. I also got a couple of decent shots off at the blueline, as I had done earlier in the pink game, but neither was a goal… they still looked good though. The Ordinals game overall was still better than how I played at Ronnie’s Ice in the morning, which was just bad all the way around. I think I was shaking off the stressful week at work… at least that’s what I’m going to attribute it too.

Next week we get a Friday/Saturday double header!