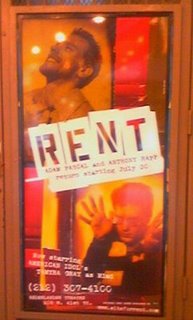 Tuesday night this week was fantastic. I saw Rent for the first time in nearly three years (it was my 11th time to see the show). The last time I was at the Nederlander Theater was Thanksgiving 2004 when Drew Lachey was playing Mark (and he was pretty good too). This week I was compelled to go back to see Adam Pascal and Anthony Rapp, the original Roger and Mark, return to the show for a six week summer run. It was great to see them back in action.

I saw them, along with the rest of the original cast in September 1996 when Will and I made our first trip to New York City together. The show had been on Broadway since April and had picked up a number of awards (including a Pulitzer for Drama) during the spring and summer. Even before seeing the show, I was hooked. The story of Jonathan Larson’s death the night before the show’s off Broadway opening had made the news, of course; and as the buzz from the New York Theatre Workshop built, the cast starting making appearances on talk shows like Rosie O’Donnell and David Letterman. The cast recording came out a few weeks before we made the trip, and I had it memorized pretty quickly.

I’ve never been able to pin-point exactly why this musical moves and inspires me to the degree it does. The story is a simple one, but the power of the music and the passion of the performers (when it’s done well) hooks me every time. I’ve seen no other show as much as this one and I’ve probably played no CD. Of course, there are also the simple messages of the show—”Measure Your Life in Love” and “No Day But Today” among them.

Returning to the show this week after so much time away, it was satisfying to find the production in such good shape. Rapp and Pascal were great. Their performances were as strong as ever, and it was nice to see them clearly having such a great time. The cast around them, for the most part, was also solid. I was relived that American Idol’s Tamyra Gray turned out to be a great Mimi. So often the Mimi’s I’ve seen since the original Daphne Rubin-Vega, do a scream-sing combination for “Out Tonight” and then can’t manage the ballad passages in “Another Day” because they’ve wrecked their voice moments before. Tamyra was fierce in “Out Tonight” and had voice left to be moving in “Another Day.” The clinker in the core cast for me was D’Monroe as Benny. It was like he was channeling William Shatner at times—just a little too much on the overacting side. Nonetheless, the show worked it’s magic on me and I was the emotional puddle that I usually am by the time the finale plays out.

I am also a fan of the film that came out in 2005. The critics mangled the film, but I think director Chris Columbus did a good job getting the story transferred from stage to screen. There are some brilliant moments, such as “Tango: Maureen,” where they did some great work making the story very cinematic. But there are clunky moments too; in particular, the choice that was made to convert some of the lyrics into straightforward dialogue. People don’t tend to talk that way and it was odd. Most importantly, however, the film allowed all but two of the original cast to preserve their performances.