HRC/Logo Presidential Debate: Thursday saw a bit of political history made as the major Democratic Presidential candidates got together in Los Angeles to debate issues as part of “The Visible Vote ’08: A Presidential Forum.” Here are a couple notable quotes from the forum:

Senator Mike Gravel (D-AK): “Five years from now, the marriage issue will be a non-issue in a presidential campaign.” Gravel went on to say that gays aren’t second-class citizens—but many people in America are adolescents when it comes to accepting the LGBT community.

Meanwhile, Hilary Clinton (D-NY) didn’t wavier on her support for civil unions and “letting the states maintain their jurisdiction over marriage.” Joe Solmonese, a panelist from HRC, pointed out that the “state’s rights” argument was often used to justify the atrocities of the civil rights era. (Indeed, in my view, until there’s something on a national level there it’s not right. I don’t care if it’s called marriage, but I need to know if I move from one state to the other I don’t have to worry about loosing my rights.)

Unfortunately, across the board, it seemed like candidates were trying to give safe answers that the Republicans would have a difficult time using against them later. I do appreciate the effort that these candidates made to address the issues important to the LGBT Americans. I’d love to see the Republicans get this frank on our issues (HRC invited them to a Forum of their own, and they all declined).

Meanwhile, Barack Obama, who is becoming my preferred candidate because of his stand on many issues, not just LGBT ones, did set up an LGBT section on his website called ObamaPride. “While we have come a long way since the Stonewall riots in 1969, we still have a lot of work to do. Too often, the issue of LGBT rights is exploited by those seeking to divide us. But at its core, this issue is about who we are as Americans. It’s about whether this nation is going to live up to its founding promise of equality by treating all its citizens with dignity and respect.” 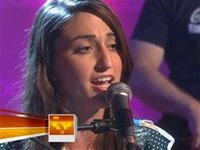 “Love Song” in the Morning: Sara Bareillies made her national morning show debut on Tuesday on NBC’s Today Show. Check out the story and the performance clip on the Today site. Locally, Sara was also slated to be on the CW11 Morning Show on Wednesday, but I’m not sure if that happened or not because of…

Stormy Wednesday…: Wow! An impressive thunderstorm rolled through on Wednesday morning around 5:30. Parts of the city got three inches of rain in an hour and there was a tornado warning posted in Brooklyn, where trees were uprooted and roofs blown off homes. It was just like being back in Alabama. I wish it had been light enough to get some pictures of the storm as the rain and lightening were impressive. Less impressive was that the subway system got completely flooded and was out of commission most of the day.

…Leads to Fall Friday: And in another bizarre turn of the weather, it got cooler through the day yesterday. By the time I left work at 4 it was 58 degrees. When I went back out to play hockey last night, I had to put jeans on it because it was no longer shorts weather. It was a treat to come out of the rink after the game last night to some crisp air! 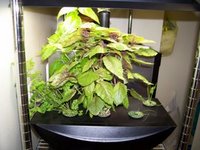 View from the Garden: Our kitchen is being overrun by basil. Okay, not really, but the garden is certainly growing well. We’ve had a couple harvests from the basil, both the green and purple. We’ve also had our first taste of the cilantro too. Speaking of harvest, we finally had enough basil that Will made pesto with it (I’m glad I shot the picture before the harvest so you can see how impressive this growth had become).

4 New York: Will is going to be annoyed I posted this because he can’t stand these promos, but I am curiously fascinated by them. A couple months ago WNBC shot a whole bunch of new promos which are just freaky fun. There are several permutations of these promos, but this is one of my faves. But I do wonder how this promo is supposed to inspire me to watch WNBC.