What Time Is It? It’s Saturday 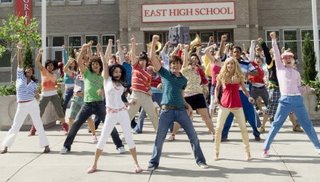 HSM2: What better way to end a crazed work week than with High School Musical 2? I enjoyed the sequel a lot. As I noted yesterday, I already knew the music was good, but the story turned out to be good too. Troy had to grow up and make some choices about what was important to him and Ryan grew a spine so he was no longer stuck being “Sharpay’s poodle.” The musical numbers were all fun, although Troy’s solo “Bet on It” was odd. The sequence seemed out of place somehow, like a music video got stuck in the middle of the movie. Yes, the song moved the plot, but it was an odd presentation. But that was just a small blip of a problem. Overall very enjoyable and I’m sure it’ll be fun to catch bits and pieces of it on Disney Channel as I’m sure they will run it over and over as they did with the original.

Facebook & Roomates: I caught this interesting note on Towleroad this week… It seems that parents are using Facebook to screen their kid’s potential roommates. Top concerns among parents: race, religion, partying and, no surprise, sexual orientation. I can see the partying concern because most parents would want to keep their under-age child from that environment. But in 2007, it’s sad that parents try to keep their kids from experiencing any kind of diversity.

Not Harry Potter: American audiences get proof that Daniel Radcliffe can do something besides Harry Potter next month. Josh & Josh wrote a blurb on the upcoming movie December Boys and I gave the trailer a look. Radcliffe plays an orphan who, along with his friends, gets the chance to spend some time outside the orphanage with a family who lives by the sea. The Brits already know Radcliffe can do more than Potter thanks to his stage turn in Equus earlier this year, but for folks on this side of the pond this will let us see the range he has. Check out the December Boys trailer and see what you think.

Hot vs. Mild: It’s been really dreadful down in Alabama. I’ve heard from my mom this week, who melted at work one night last week when the air conditioning on her floor was out, and read Cheryl’s blog about the 110 degree day that Friday was. I was happy to not be there because I never did the heat/humidity combo well. NYC has been reasonable this week. As I wrote last Saturday we cooled off and this week actually stayed mild, which is odd for August. The week was in the 80s and we’ve backed into the 70s for this weekend. Hopefully some of this nice weather can drift south.