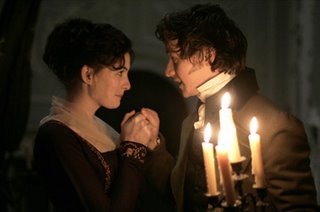 We went to Becoming Jane today and it was a delightful way to spend a couple hours. The film is a fictionalization of Jane Austen’s life, drawing heavily from the themes of her novels.

Anne Hathaway plays Jane who is torn between being her own woman and earning her own way with her writing, marrying a rich man she doesn’t love to benefit her family or going off with the man she loves and risking everything. Hathaway is solid in this role as she plays the range of emotion that Jane goes through as she struggles to figure out which course she should take.

James McAvoy and Laurence Fox play the two men actively seeking Jane’s affections. While Fox’s Mr. Wisley offers riches, it’s McAvoy’s Tom Lefroy that captures her heart even though he’s got considerable baggage of his own. The movie is at its best when McAvoy and Hathaway are together, alternating between rivalry and courtship.

Also of note is Maggie Smith as Lady Gresham. Smith owns the movie during her scenes. She is superb as she displays her dismay over Jane’s choices.

While the movie is slow in spots, especially the first 20 as everyone is introduced and the story set up, it pays itself off quickly as Jane and Tom discover each other. And the ending of the is pitch perfect as it jumps several years forward so we know what becomes of the characters.

Coming Soon: One of the trailers we saw today was for August Rush, starring Freddie Highmore (Finding Neverland), Keri Russell (Waitress) and Jonathan Rhys Meyers (Showtime’s The Tutors). Highmore is an orphan who goes in search of his biological parents, using the power of music to draw the three of them back together. The film looks great, likely one I’ll need to bring kleenex to. The one fear is that Robin Williams is featured in what could be a too-kooky bit part. August Rush is slated to come out Thanksgiving weekend (at least that’s the release date IMDB posts for it). Check out the trailer and see what you think.