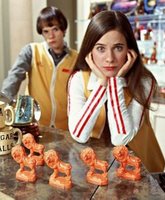 How would you feel if one day a stuffed animal spoke to you? Jaye Tyler thinks she must be going insane. Over the course of the 13 Wonderfalls episodes, Jaye is given directions to help people from an array of inanimate animals. A sampling:

From the wind-up penguin: “Bring her back to him!”
From the wax lion: “Word of Advice. Don’t Give Her Her Money Back.”
From the cow creamer: “Bring her home.”
From the Muffin Buffalo: “Keep ’em here.”
From the love-sick ass: “Girl needs a donut.”

I missed this show when it had a brief four episode run on Fox in 2004, but I fell madly in love with the series when it was part of Logo’s debut lineup (and it still crops up on Logo so you can catch it there).

Clearly the show is quirky, but it also manages to not be annoyingly quirky. Jaye gets sent on some wild adventures courtesy of the animals, who usually deliver their messages cryptically—as you can tell by some of the directions above. Meanwhile, her family of overachievers: a doctor, a writer, a lawyer and a grad student, all want her to give up her slacker ways of working in a gift shop.

If you liked Picket Fences or Ally McBeal (or Joan of Arcadia, which this show is often compared too–Joan got her directions from God while Jaye gets them from inanimate animals), you should be ga-ga for Wonderfalls so pick up the DVDs and enjoy. To give you a sample, below is a clip from the pilot episode, including the first words Jaye gets from the wax lion.

Trivia note: The wax lion made a guest appearance this past TV season on Heroes. In one episode it was sitting on Micah’s bedside table. Why? Bryan Fuller, a co-creator of Wonderfalls, is an executive producer on Heroes.