It’s a great day to stay inside, and curl up with a book or just watch TV. It’s soggy, rainy, icky outside! The upside, if there is one, is that it at least feels like fall.

Jury Duty Completes: I completed jury duty in just two days. I was in a couple pools to potentially get on cases, but I didn’t get selected for either so I wrapped up yesterday afternoon. Civil cases are a lot more intense in their questioning of jurors, at least for the two pools I was in. In the criminal case I did a few years ago, the jury were set in a couple hours. In both of these cases, it took five to six hours to whittle down the pool of 30 prospects to the eight that were going to serve. Anyway, that’s done, so regular work life resumes on Monday. 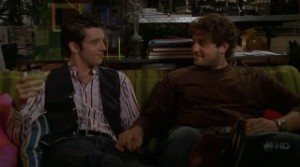 Fantastic Betty: Yes, I gush about Ugly Betty a lot, but it just keeps getting better. This week stood out for a couple reasons. Mark getting together with the photographer was a really wonderful turn for his usually superficial character. Yes, we’ve seen more depth to Mark a couple of times—such as his coming out to his mom last season and how he interacts with Justin—but his connection with Cliff was really great (I’ve read Cliff is around for at least a couple more episodes, so I’m looking forward to where this might go). Also this week, Justin and Hilda unleashed more of their grief over Santos’ death and that was really heart wrenching. Next week the show goes off to Wicked and that is bound to be fabulous! (The screen cap comes from www.superherofan.net, some of the best TV and movie caps around.)

Dumbledore’s Outing Upsets: No surprise that the right wingers were none too pleased that J.K. Rowling told the world that Dumbledore’s gay. Fox News’ Bill O’Reilly was interviewed by Dennis Miller on Thursday night and said this: “There are millions of Americans who feel that the media and the educational system is trying to indoctrinate their children to a certain way of life, and that includes parity for homosexuals with heterosexuals. And that’s what this Rowling thing is all about, because she sells so many books. So many kids read it, that she comes out and says, “Oh, Dumbledore is gay, and that’s great.” And this—it’s another in the indoctrination thing. That’s what the belief system is among some Americans.” My question is, since when is parity and tolerance a bad thing? Why wouldn’t we teach that to children?

Mark Harris, writing in his Entertainment Weekly column had this take on it: “J.K. Rowling’s announcement about Dumbledore isn’t a plot twist. It’s a challenge to look at the world—even a world of wizards and magic—as it really is. Kids are more than up to meeting it. I wish I could say the same about grown-ups.” Well said!

Fab Daises: And while I’m mentioned Ugly Betty, I’d be remiss to say that I wasn’t completely enchanted that Kristin Chenoweth and Ellen Green had a brief duet in Pushing Daises this week. I worry this show might not be able to sustain its storyline, and that occasionally (like the October 17 episode) it gets too cute for it’s own good, but moments like this will definitely keep me coming back. 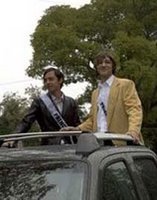 Homecoming Princes: A great story I picked up on Towleroad yesterday (proof that in many places there is tolerance and parity, although I’m sure this upset Bill O’Rielly) showed the Princes of Davis Senior High School’s homecoming in Davis, California. Brandon Raphael and his boyfriend Kiernan Gatewood were elected and have done all of the homecoming rituals expected of them, including the parade shown at right. Check out the whole story…

Beads, Feathers, Trim…Oh My: It’s been interesting getting used to the new part of town I work in. It’s right in the middle of the fashion district. (If any of you watched Project Runway last year, I work about half-a-block down from the building where the designers lived.) Anyway, not only are there tons more people to maneuver around on the street since I work between two major tourists spots (Herald Square and Times Square) and it’s the middle of the midtown business district, but there’s also all this fashion stuff. There are entire stores devoted to beads, to ribbon, to feathers, to trim, not to mention fabric and apparel of all kinds. It’s pretty cool to window shop on the way to and from work just to see what all is there… especially since I didn’t know you could base an entire store on ribbon.

“Love Song” video: Sara Bareilles recently released the video for “Love Song.” It’s a lot of fun. I can’t embed it, but you can hop over to YouTube to see it. Enjoy!