The Pond at Bryant Park Opens 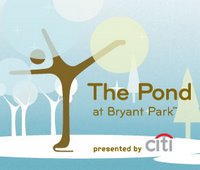 One of the great benefits of working in midtown is I’m two blocks away from Bryant Park, which is a nice bit of green on 6th Avenue between 40th and 42nd Street. Things are always going on in the park and today was the opening of the skating rink.

Since it’s such a nice day, crystal clear and in the 40s, I took lunch in the park and watched the opening ceremony. If I’d known about it sooner (rather than 15 minutes before it happened), I would’ve brought a camera. But it was fun to be out here for it anyway.

The cast of Alter Boyz performed. The cast from the new Smucker’s Stars on Ice tour did some great skating. It was a nice way to spend lunchtime. (If I can find any pictures of the ceremony online, I’ll post them later.)

Once Bluestreak completes on November 12, I’m going to have my skates under my desk during the week so I can go skate anytime the mood strikes (it’s free admission, so all the better).