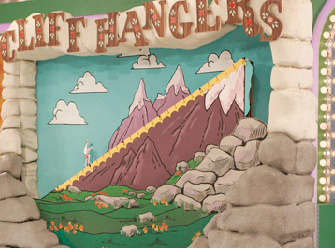 The Monday treadmill session had me working on a grade virtually the whole time, anywhere from 22% to 30%. And the task here was really to climb. The mill was set at only 4 miles per hour so I had to really grind into the mill and just keep climbing. The idea here is that it helps to lower your center of gravity because the lower your stance, the easier it is to go. By the end of the session I got a little dizzy having pushed so hard, which I suppose is a good thing. I ended up skipping the very last bit of my last go around on the mill because I was about to fall over. It took me about 15 minutes to rebound enough do plyos. It was a rough, yet rewarding, evening.

Monday’s skills session was interesting too. Worked more on the wrist shot as expected, but also did some work on a slap shot too, which I’d never tried. I think since I’ve worked so hard on the wrist shot, maybe some of the fundamentals of the slap shot were already in my head because I picked up on this relatively (at least for me) quickly. I am surprised at how powerful that shot is when I execute it right.

Wednesday the mill was a little easier. I only had to play Cliffhangers once, early in the session. The rest of the time was more about distance endurance. It was a good way to wrap up this cycle’s mill work. For skills, it was mostly all about slap shots, which was good. Jimmy refined my shot a little more. I’m definitely going to be practicing that a bit on Saturday morning this week. If I can nail a slap shot down, it’ll be a great thing to be able to unleash from my defensive position back on the blueline.

I go in this coming Monday for my post test. That will close the book on this cycle of Bluestreak.