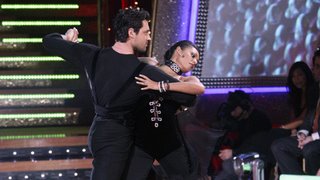 Mel B rocked last week with the amazing paso doble. Last night she brought a stunning tango to the floor. It didn’t bring her her highest scores ever, but it did yield a 27 and I thought it really deserved a 30. It was fierce, it had tight choreography and great music (Depeche Mode’s “Personal Jesus”). For my viewing, it was actually Mel’s night once again. Her second dance was a wonderfully flirty mambo, which got her a 29 (Carrie Anne, why not a 10 from you?).

Jeannie and Marie again made me happy. Jeannie’s Jive was fun. I agreed with the judges that, once again, she just needs to let go and dance (like Richard Simmons told her “You’re a showgirl, so shine!”). She came back with an awesome foxtrot that showcased her and Derek great. I really want to see Jeannie continue for at least another couple weeks. Marie had a classy rumba and then a perky, fun jive. I agree with Len, jives are meant to be perky with lots of kicks and such so I don’t know what Bruno and Carrie Anne were complaining about.

Now, I’ve not been a fan of Heilo. I didn’t much like his paso doble, but that was more on the choreography side. The capes got in the way and I was surprised the judges didn’t feel that way too. He did shine with his quickstep, however. The choreography was fantastic–it was fast and he was working a good character. It was a deserved 30. Cameron’s Viennese waltz was lovely and he and Edyta looked beautiful doing it. It was odd that it was done to the Harry Potter theme and that was actually a bit distracting. I didn’t much care for the Cha Cha. It looked like he was back in his John Smith outfit from a couple weeks ago. And, the dance itself, was just a little too mechanical.

Who goes home? It gets harder to pick at this point in the competition. I’m going to say Cameron. In reality it should be Marie because for all the fun she is, she’s starting to fall behind the other dancers. But, I don’t think the public can vote her off in the week that her father passed away. Also, just to put it out there, I think Mel will walk away with the mirror ball in a couple weeks.

Results Show Update: Cameron did go home as predicted. Next week the semi-finals start with four couples left. Mel and Heilo are certainly the front runners, but as we’ve seen this season anything can happen!