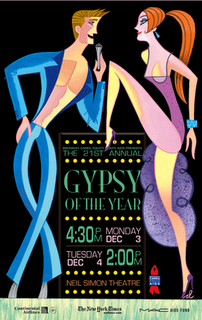 One of the casualties of Broadway strike is the annual Broadway Cares/Equity Fights AIDS Gypsy of the Year fund raiser. During the six weeks around Thanksgiving, BC/EFA stages a competition between Broadway, Off-Broadway and touring productions to see who can raise the most money. The casts encourage audiences to donate with cast members collecting cash at the exits after the show and selling special merchandise. Because of the strike, BC/EFA estimates it lost $350,000 in donations last week and will do so again this week.

To help make up for this shortfall, BC/EFA has set up its website to accept donations. I signed up to be a part of Team Rent and I’d like to ask everyone who reads this blog to donate a little something to the cause. Simply click on the Team Rent link and then click on my name on in the Team Roster and then you’ll click “Support Jeff.” Whatever you can give will help offset some of what’s being lost to the strike. I’ve pledged to raise $300 in the next two weeks… let’s work together to blow through this amount (if you have a blog, please post this information there too).

According to the BC/EFA website: “At an average loss of over $350,000 per week, BC/EFA will not be able to award the usual annual grants to six programs at The Actors’ Fund – including The AIDS INITIATIVE; The Phyllis Newman WOMEN’S HEALTH INITIATIVE, The Al Hirschfeld FREE HEALTH CLINIC and more, which include the food pantries, meal delivery programs, housing initiative and health clinics of over 400 AIDS and family service providers across the country.” To learn more about the BC/EFA’s mission, which extends beyond the entertainment community, check out its mission statement.

You can be sure that many people will give thanks for whatever donations you can make.