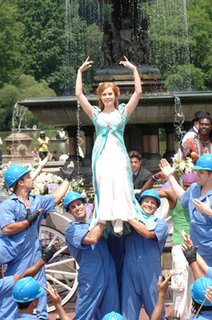 We started off the holiday weekend this morning by taking in the new Disney movie Enchanted. It was exactly what you’d hope it would be—Enchanting! Before you read too much further, a heads up that spoilers lie ahead (I can’t help it in this case.)

The movie is a modern version of a typical Disney film: girl meets prince, they plan to get married, the evil queen thwarts the marriage, prince rescues girl and girl goes off with another man. Wait, what was that? Yes, that would be one of the many modern takes here. The prince doesn’t get the girl. As you’ve probably seen in the trailers, this movie leaps from the animated world in to the real world of New York City.

Traditional Disney rears it’s head a few times as the girl and the prince break into song in the middle of New York. In particular, Giselle’s song in Central Park is awesome (a still of that is to the left). It’s one big tour of the park as they get more and more folks singing along with them. The longer Giselle is in the real world though, the less in love with her prince she becomes. Instead falling for the mortal Robert. I won’t spoil the ending of the film, except to say that the final showdown with the evil queen was fantastic. 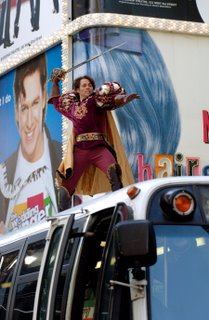 A great cast here too with Amy Adams as Giselle, Patrick Dempsey as her real world love, James Marsden as the prince (shown at right in a showdown with a NYC Transit bus) and Susan Sarandon as the evil queen. A surprise person to find here was Rent alum Idina Menzel as Robert’s girlfriend (who ends up on an adventure of her own as the film goes on).

My one gripe is that Idina didn’t get to sing! Even Patrick Dempsey sang a little bit. Oh well, the one tiny complainant in an otherwise wonderful movie!

One of the cool things to see in this movie was the scene with the bus. Last spring, on some random weekend afternoon, we were in Times Square and we saw the shoot in progress for the scenes around and on the bus. At the time we had no idea what it was for, and now suddenly there it is. New York, by the way, looks great in the film. Times Square, Columbus Circle and Central Park look fab and are represented accurately (always nice to see locations actually make sense in a movie).

Take this in over Thanksgiving weekend… you won’t be disappointed (or should I say you will be enchanted?)!