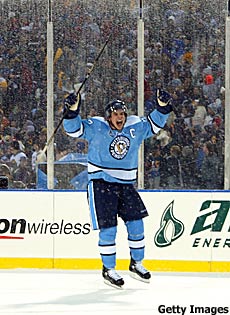 My inner hockey Geek was raging on New Year’s Day as the Pittsburgh Penguins played the Buffalo Sabres outside at Ralph Wilson Stadium in Buffalo. Some 71,000 fans packed the stadium (keep in mind that most NHL arenas hold 20,000 more or less) and sat through snow and sleet to watch the Penguins win the game in the shoot out (at left is Sidney Crosby celebrating his game winning shot). This was a historic game for a couple of reasons: it was only the second time an NHL game has been played outdoors and it was the first time it happened in the U.S.

Watching the first period of the game was magical with the snow falling and seeing these big NHL players essentially reliving their childhoods playing on open ponds. It also changed how they played the game because the conditions kept changing. It snowed in the first and third periods, but there was sleet in the second and the wind kept shifting. The snow on the ice meant the puck didn’t travel like they were used to. They even stopped the game mid-period a couple times to let the Zambonis come out and clean the ice because the snow would get too deep. 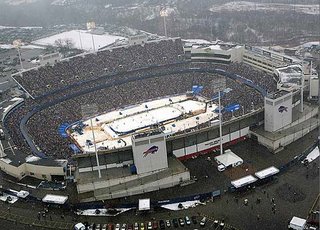 In my short hockey career, I’ve only played outside a couple of times. There’s a outdoor rink at the northern tip of Central Park and it’s so much fun to play out there. While I’ve never played in the snow, to play outside at night in the winter air is an awesome experience. It makes me wish I had played as a kid in Michigan. I have been on ice in a raging snow storm once. Back in January 2004, the NYCGHA got to shoot the opening for So Graham Norton, a BBC talk show that was shooting a number of shows in New York. We shot on the rink at Rockefeller Center in a pretty significant blizzard. You can check out some pictures (and the intro itself) on the NYCGHA site. That shoot was a lot of fun and we were goofing around with a puck while the shoot was being set up.

I hope the NHL makes a habit of the Winter Classic (and that they put out a DVD of this game because I would buy it just to relive the first period from time to time). It probably won’t snow every time, but to bring the game outside would still be a great yearly tradition.