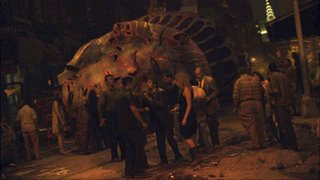 It’s been a long time since I have been as tense in a movie as I was during Cloverfield. Yes, I Am Legend and the recent Halloween remake had me tense. But Cloverfield keeps upping the ante from the moment of the first explosion in lower Manhattan.

Note: I’m going to try to not give too much away in the following paragraphs… but if you want to completely avoid the potential spoiler zone, hop to the last two paragraphs now.

One of the things that makes the movie so successful is its single point of view… it’s whoever has the videocamera. The movie starts calm enough, there’s a going away party in progress and someone is documenting the party. Once the mayhem starts, the camera is on the move. It passes around periodically, but maintaining a very tight POV that keeps the audience from knowing only as much as the immediate group of friends does. 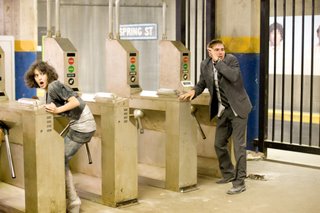 What are they running from? Initially they get quick glimpses of it. They see more of it while they are in an electronics store where the TVs are on. We get up close views later though as more and more of the city is destroyed. And the question of what it is never gets answered because the characters never find out. And that’s okay.

What did I learn from the movie? Always keep your phone as fully charged as possible. Never think the subway tunnels are an escape route. There is always a way to rescue a friend. Always move away from loud thumping noises, not towards them. And, perhaps most importantly, try to wear sensible shoes at all times.

Okay, out of the spoiler zone now… Cloverfield was an awesome movie going experience on the big screen, especially because of the big sound. The tight POV keeps everything super tense. I had a blast, even if it did take me almost an hour to completely calm down.

A couple of cool trailers too before the feature: Iron Man, out this summer, looks fantastic. And Star Trek had a super quick trailer. It didn’t show much at all, but it was goosebump inducing nonetheless (I can’t find a good copy online to embed or link to, so just keep a look out for it).