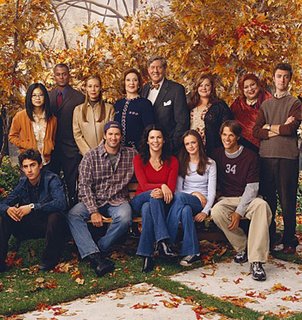 I’ve been experiencing a Gilmore Girls renaissance lately, thanks in part to the writer’s strike giving me less new stuff to watch.

But it stated when I was off for MLK Day last month. I happened to watch the Gilmore rerun on ABC Family that afternoon. I landed right in the middle of some of the finest of Gilmore Girls episodes, season 2, episode 13 “A-Tisket-A-Tasket” in which Jess outbids Dean for a picnic lunch with Rory. I got hooked on the show all over again and have recorded it every day sense. I don’t let the episodes pile up, in fact I only allow the DVR to keep one episode and a time and if I don’t get it watched, it’s gone. So far, however, I haven’t let that happen.

Nearly a month later, the excellence continues as we near the end of season three with Rory graduating Chilton. It’s been some excellent TV: Rory’s college application dilemmas (Harvard … or Yale), the Paris/Rory showdown over student government, Dean and Jess’ ultimate fight, Paris’ meltdown on C-SPAN, the fire at the inn. The show will start to take a turn next week as season 4 starts and Rory goes to college. The show was never quite the same after that. I know my time to watch is limited because by season 5 I think I’ll have to stop to preserve the memory of Gilmore Girls at its best.

For your enjoyment, some premium Gilmore banter…