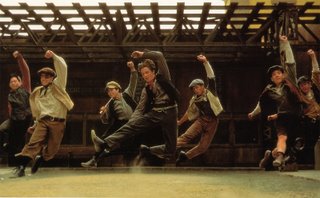 Long before High School Musical there was another Disney musical directed by Kenny Ortega (it was his feature film directorial debut coming off his stint as choreographer on Dirty Dancing) that featured teens singing, dancing… and staging a strike against New York’s newspapers. Newsies, from 1992, was based on a real 1899 newspaper boy strike against the Hearst and Pulitzer newspapers.

Pretty weird concept for a Disney movie musical, right? And, yet, I love this movie because it is so out there in concept with rousing tunes and a cast full of people you know.

Robert Duvall played Pulitzer, Ann-Margret was a vaudeville star and Bill Pullman was a journalist covering the strike. Perhaps the most interesting casting note here was Christian Bale as the newsboy who leads the strike. Bale got wide attention for his lead role in Steven Spielberg’s 1987 Empire of the Sun and this was one of his first “adult” roles. Others you can recognize from the young cast are David Moscow (the young Tom Hanks in Big), Max Casella (Doogie Howser‘s friend Vinnie) and four cast members from Geek Out favorite Roundhouse. 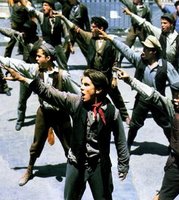 The music came from a Disney powerhouse. Alan Menken had already written the music for The Little Mermaid and Beauty and the Beast when he tackled Newsies. Today he’s nominated for three Oscars for his contributions to this year’s Enchanted. Yet, Newsies earned him and lyricist Jack Feldman a Golden Razzie Award for worst song of 1992 for “High Times, Hard Times,” performed in the film by Ann-Margret and the newsboys. The film was nominated for four other Razzies, including worst supporting actor nods for Duvall and Ann-Margret, worst director and worst film (Michael Douglas’ Shining Through won that year).

Despite all the negative, I saw the movie a couple times in the theatre and still watch it whenever it’s on TV or when I have the urge to pop the DVD in. There’s something mildly addictive to it because at it’s core it really is a bad film, but something about the combination of ingredients makes it wildly enjoyable viewing.

Here’s a clip featuring “The World Will Know,” which is the song that kicks off the strike.