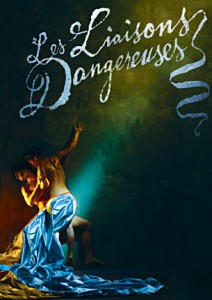 This afternoon we started our anniversary week of theatre with Les Liaisons Dangereuses, a new staging of Christopher Hampton’s 1987 play . We were attracted to this production because of its cast list featuring Laura Linney, Ben Daniels and Siân Phillips.

Of course, most Americans know this under its English name: Dangerous Liaisons, the 1988 Glenn Close film that was based on Hampton’s play. In addition, we’ve seen a modern update with 1999’s Cruel Intentions.

In the play, Linney is in the Glenn Close role as Marquise Isabelle de Merteuil a well-to-do woman who plays games of deceit, lust, bertryal and manipulation seemingly for fun. She joined in her games by Le Vicomte de Valmont, played by Daniels, who enjoys the challenge in bedding the women that are part of the Marquise’s plans.

The two destroy or change the course of three lives over the course of the play by pulling and pulling on the strings. Ultimately the Vicomte is also destroyed and the Marquise loose a little bit of herself as the game takes on rather epic proportions.

The play was simply delicious. Linney is top notch as the master of deception calling the shots. As an actress you can imagine that she is releasing this role because it is quite different from her usual work. Daniels was also great. We’d seen him previously in the film Beautiful Thing and he was very good here, especially as he tried to escape the game.

Beyond the great script and acting, the production design is also fantastic, and actually evolves over the course of the show as things start to fall apart.

This production, which opens next Thursday, has already been nominated for nine Outer Critics Circle Awards, including nominations for Linney and Daniels as well as Best Revival, Best Director and Best Staging, Lighting and Costumes. I expect when the Tony nominations come out in a couple of weeks the same will be the case.

Les Liaisons Dangereuses was a fantastic start to our show week. Next up, the revival of Gypsy starring Patti LuPone and then next Saturday A Catered Affair, a new musical with Faith Prince, Tom Wopat and Harvey Firestein.