Friday Geek Out: All That Jazz 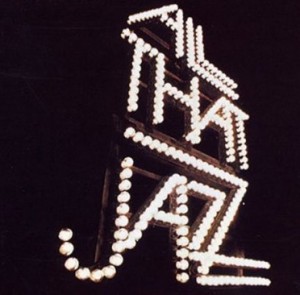 Bob Fosse made a movie all about himself with 1979’s All That Jazz. Roy Scheider played director/choreographer/writer Joe Gideon. The parallels to Fosse’s live are unmistakable. Fosse had a heart attack while working on his 1973 film Lenny, which is portrayed here. The stage show Fosse worked on in the same time frame was Chicago, which was affected by his heart attack. Where the autobiographical element comes to halt is that Fosse didn’t pass away during the production of All That Jazz. He lived another 8 years after the film’s release, dying in 1987… of a heart attack, just like his film’s alter ego.

This film is amazing. I first saw it when it aired on cable in the early 80s. I have to admit at age 13/14, I didn’t completely get the movie the first few times I saw it. I was mesmerized by the choreography and dance numbers. I didn’t get some of the subtleties of the conversation Gideon carries on in his head with Angelique (portrayed by Jessica Lange). I got that there was martial strife, but not everything that was going on with the other woman. Later, I got it all and find that I can watch this film over and over again. The screenplay by Fosse and Robert Alan Arthur is brilliantly constructed and executed by Fosse as a director.

To me, this was Scheider’s best role ever, and so different from anything he played before or after. He sings, he dances and he acts the hell out of the part — a man who is truly loosing his grip on reality and his life. The supporting cast is top notch too. This was Lange’s second film, coming after the not-so-well-received 1976 remake of King Kong. Ann Reinking is the other woman (just as she was in Fosse’s life). Ben Vereen is a variety show host who plays a major role in Gideon’s final number. John Lithgow turns up as a director who is poised to take over direction of Gideon’s stage show if he dies.

The film was a co-winner of the Golden Palm at the 1979 Cannes Film Festival and was nominated for nine Oscars, including Best Picture, Best Picture and Best Actor. It won 4: art direction, costume, film editing and music.

A couple clips for you to check out this morning (both lengthy too at nearly 10 minutes each). First up is “Take off With Us/Air-Erotica” (NSFW…it’s one of the many reasons this film is rated R). This is Gideon’s attempt to put some spark into the stage show he’s working on. About a decade later this would be the inspiration for Paula Abdul’s “Cold Hearted Snake” video. Second is Gideon’s big finale number where he truly says “Bye, Bye Life.”