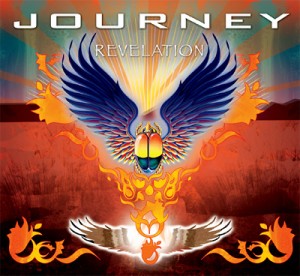 The mid-80s came roaring back for me yesterday as Journey released a new album. One that finally sounds like the Journey I have always loved.

I found out about the release of Revelation on CBS Sunday Morning this past weekend. In the summer music feature, John Blackstone told the story of Journey’s discovery of a new lead singer on YouTube. Arnel Pineda had several clips on YouTube showing him as the lead singer of the cover band The Zoo, which was based in the Philippines. One of the songs he did was “Faithfully” and he sounds shockingly like former lead singer Steve Perry, the voice everyone thinks of when they think of Journey.

I downloaded Revelation yesterday morning and it is fantastic. It’s a two-disc set. One disc is brand new material that sounds like the Journey you remember from the days of Escape and Frontiers. The second disc features new recordings of classic songs, such as “Separate Ways” and “Faithfully.” If I hadn’t known about Pineda joining the band, I’d swear these were recorded by Perry. It’s an amazing similarity.

You can do your own compare/contrast. Below is a clip of the new Journey from their recent appearance on Ellen and a clip from a 80s Journey concert. Both clips feature “Separate Ways.” Enjoy!